The Chevrolet Corvette vs. the Porsche 911

The two are closer competitors than they’ve ever been before. 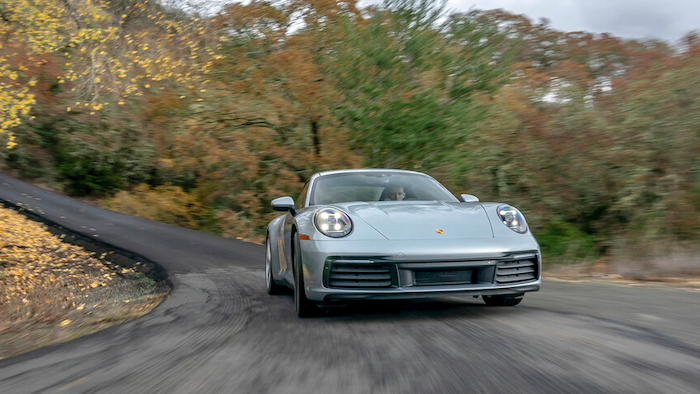 The Chevrolet Corvette and the Porsche 911 are closer competitors than they’ve ever been before. Both cars were redesigned for 2020, with big changes for the Corvette and small but effective evolutions for the 911.

The recent switch of the Corvette from a front-engine to a mid-engine layout brought significant improvements in handling and overall performance. Interior quality is higher, too. Are these changes enough to vault the Corvette past the Porsche 911, long the benchmark of an everyday sports car? Edmunds’ experts compared them to find out.

The eighth-generation Corvette, often referred to as the C8, is powered by a 6.2-liter V8 engine. Standard Corvettes are rated at 490 horsepower and 465 lb-ft of torque. Opting for the Z51 performance package bumps power up slightly to 495 horsepower and 470 lb-ft. Every Corvette comes with an eight-speed dual-clutch automatic transmission. While you might miss the fun of rowing your own gears, a dual-clutch transmission shifts more quickly than a manual or a traditional automatic.

Naturally, every tenth of a second counts when it comes to acceleration bragging rights. During Edmunds’ testing, the 2020 Corvette coupe with the Z51 package accelerated from 0 to 60 mph in 3.4 seconds. This is impressive acceleration for a base Corvette.

The 911, however, is hardly sucking wind. Powering the standard 911 Carrera coupe is a turbocharged 3.0-liter six-cylinder engine with 379 horsepower and 331 lb-ft. It comes standard with an eight-speed dual-clutch automatic. You can get a 911 with a manual transmission too. At the Edmunds test track, an automatic-equipped 911 ripped from 0 to 60 mph in 3.6 seconds, right on the Chevy’s heels.

Though higher-performance variants of the Corvette are sure to come along, Chevrolet is, for now, only offering the one V8 engine. Porsche has more available powertrain upgrades, starting with the 443-horsepower Carrera S and going all the way up to the 2021 640-horsepower Turbo S. Just know that these take you well past the price of a fully loaded Corvette.

In the handling department, these two icons are equally impressive. They are easy to drive fast thanks to high handling limits and excellent steering feel. We give the 911 a slight edge, though, when it comes to overall driving engagement.

The Porsche 911 shines in its performance, but its interior technology let us down. It does not offer Android Auto compatibility, and some of our experts find its touchscreen and control knob a bit of a reach.

Meanwhile, the Corvette’s infotainment screen has crisp graphics and supports both Apple CarPlay and Android Auto smartphone integration. The Corvette also offers a better-sounding stereo system in its base form. An in-car vehicle data and video recorder, which you can use at racetracks for high performance driving, comes standard on most Corvette trim levels too.

The Corvette’s driver-focused cockpit, with its center console angled toward the driver, can look strange at first. But the real-world experience is pleasingly distinctive and provides easy access to all the cabin’s controls. This newest Corvette is more comfortable than ever too. Whether you’re in the city or on the highway, it provides a well-damped and quiet ride.

As you might expect from the more expensive Porsche, its cabin is more refined than the Corvette’s. On the highway, the 911 is a bit noisier than the standard Corvette, and its engine can sound a little rougher at lower speeds. Rev up the 911, though, and you’ll enjoy the classic sound of Porsche’s six-cylinder engine.

The 911 offers similar comfort no matter which variant you decide to purchase. Yet one key advantage the 911 has is a rear seat. It’s tiny, but you can use it to take along a couple of kids in a pinch. The Corvette is a two-seater only.

One of the Corvette’s strongest virtues has always been its value for money ― it offers big V8 power at a reasonably attainable price. The base Corvette starts at $59,995 including destination. Sure, we’d opt for some extras that bring the price up, but that’s still lower than the 911.

The base Porsche 911 checks in with a manufacturer’s suggested retail price of $98,750 (including destination). And if you want to spring for the more powerful Carrera S, that price shoots up to $114,650. Porsche offers more in the way of customizing options, such as special colors and configurations, but those again further boost the price.

Edmunds says: It was a close race, but the Corvette beat out the 911 and even earned the Edmunds Top Rated award for best sports car. It does so by offering astonishing performance, a premium interior and excellent on-road comfort at price that significantly undercuts the 911.