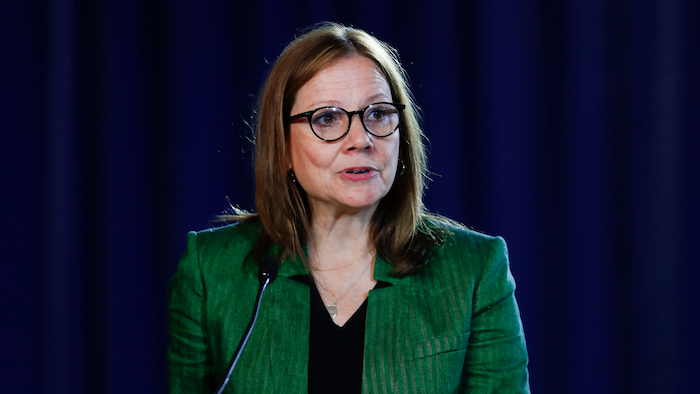 DETROIT (AP) — The auto business used to be pretty simple. Crank out vehicles that people want to buy and collect profits.

It’s gotten a whole lot more complicated since Mary Barra took over as CEO of General Motors in 2014.

She has cut costs and streamlined management, closed factories and sold off money-losing operations in Europe, partly in preparation for the next downturn.

Thanks to the coronavirus, it’s here. Barra talked with The Associated Press about steering GM through the crisis. Answers are edited for length and clarity.

Q: Coronavirus cases are rising, and you’re going to cancel the third shift at a factory in Wentzville, Missouri, because you don't have enough workers. Are you worried that factories could be shut down again?

A: If you step back to March, and even before then, we had a lot of learnings from China, from Korea and the United States. We believe we do a very good job of keeping people safe by reducing the possibility that someone with COVID can enter our plants. And then all the work we do within the facilities to prevent the spread. We took time and we trained everybody. People understood that we’re working hard to keep the environment safe for them. One of the things we’re trying to do now is really encourage people to use those same protocols when they’re not at work. They’re wearing masks, they’re handwashing, hand sanitizer and that they’re social distancing. We feel that we’ve got a safe environment at work. At Wentzville, one of the things we do is screen. We are taking the precaution to say that you need to quarantine until we know that you don’t have the virus. I’ve been at 10 plants since we started back up, and I’m continuing to go to plants. When I talk to people, they understand the protocol. To a person, they tell me I feel safer here than I do at the grocery store.

Q: Does it concern you that states might go back to stay-home orders?

A: We are watching everything very carefully. The conversation I’ve had with many different officials is they understand with the protocols that people are safe at work. I think we’re seeing steps being taken across many of these areas with lessons learned about maybe what worked well in reopenings and what didn’t. In Michigan now you see the requirement that people wear masks. I think you’re seeing steps being taken in more places. That allows the numbers to go back down and we start on the road to recovery.

Q: Do you think auto sales are going to get back to normal anytime soon, in the U.S. and globally?

A: We are seeing a recovery. We think it’s going to be a relatively short-lived recession. But we have a long way to go because we went to a pretty low base. The new outbreaks do pose potential setbacks, but we’re hopeful that the U.S. economy will be back to 90% of pre-pandemic levels early next year. There’s a lot of uncertainty.

Q: After George Floyd’s death, you took a strong stance to fight racism. Usually companies don’t do this. In today’s politically charged atmosphere, are you worried about alienating some customers?

A: We felt it warranted a very strong statement, but more than words: actions. That’s why we formed the Inclusion Advisory Board. And we’ll have our first meeting yet this month. I’m very proud of General Motors' leadership in supplier diversity, dealer diversity. We have over a dozen employee resource groups. And so we look at all the work we’ve done, what we want to do now is build on that. We want to create an inclusive environment where everybody can bring their true self to work, because we believe that is what really empowers people and leads to the most engaged workforce. It’s hard to argue against wanting to create an environment where everybody can be themselves.

Q: Tesla has said it has 400 miles of battery range on some of its vehicles. Is that within reach for for General Motors?

A: A lot of the customer research we’ve done, we know 300 mile range is a sweet spot. With the flexibility of the Ultium platform, we have the capability to go higher than 300. We’ll be looking at what the value equation is for the customer.