Harley has been struggling with declining sales in the U.S., its biggest market. 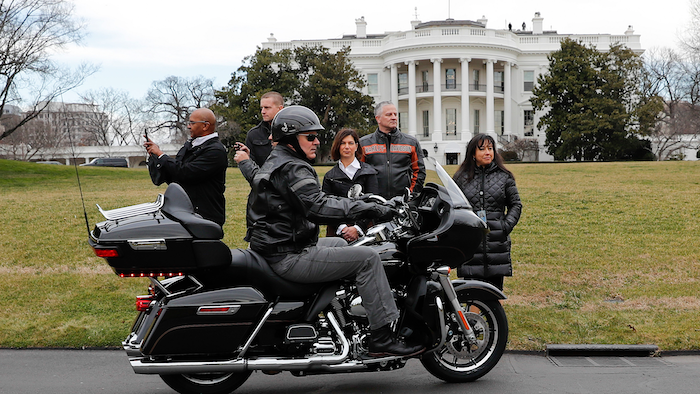 Harley Davidson President and CEO Matthew S. Levatich rides his motorcycle onto the South Lawn of the White House in Washington before a meeting with President Donald Trump and Vice President Mike Pence.
Associated Press

The Milwaukee company announced Friday that Levatich will leave his post and seat on Harley's board of directors.

Board member Jochen Zeitz will become acting president and CEO while a board search committee is formed and Harley hires an outside search firm to fill the job.

“The Board and Matt mutually agreed that now is the time for new leadership at Harley-Davidson,” Zeitz said in a prepared statement.

Harley has been struggling with declining sales in the U.S., its biggest market, as it tries to adapt to an aging customer base while looking to expand markets overseas.

The announcement of the leadership change, made after the markets closed, pushed Harley’s shares up 5% in after-hours trading. They had fallen 2.3% with the broader markets during the trading day.

Harley’s closing share price Friday was down 18% for the year.

The company said Levatich will stay on through March to assist with the transition.

Zeitz also was named board chairman, replacing Michael Cave, who becomes presiding director. He said the board is confident that its leadership experience and understanding of the company will bring an effective transition.