Nissan said in a statement that it hoped Ghosn would return to Japan to stand trial. 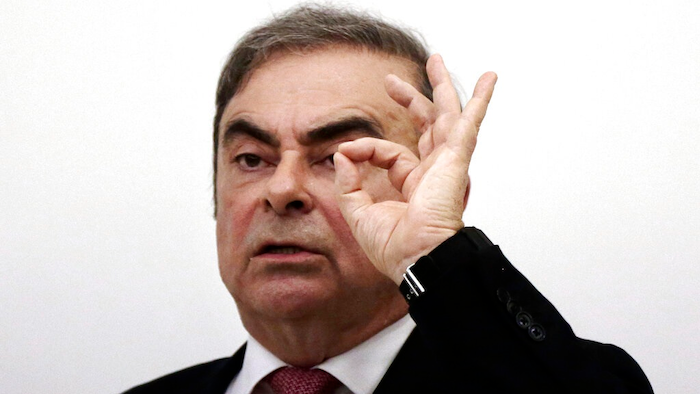 In this Jan. 8, 2020, file photo, Nissan's former chairman Carlos Ghosn, speaks at a press conference in Beirut, Lebanon. Japan's Justice Minister Masako Mori said Friday, Feb. 28, 2020 that she was dispatching the official to Beirut for talks on the case of former Nissan Motor Co. executive Carlos Ghosn, who fled for his home country late last year while out on bail awaiting trial.
AP Photo/Maya Alleruzzo, File

TOKYO (AP) — A Japanese vice minister for justice is heading to Lebanon for talks on the case of former Nissan Motor Co. executive Carlos Ghosn, who fled for his home country late last year while out on bail awaiting trial.

Justice Minister Masako Mori said Friday that she was dispatching the official to Beirut to explain the Japanese criminal justice system and improve cooperation.

She said Japan hoped Lebanon would gain “a proper understanding of the Japanese criminal justice system.”

Japan and Lebanon do not have an extradition treaty and it's unlikely Lebanon would agree to send Ghosn back to Japan to face trial.

Mori acknowledged that there were “various environments” and laws that underpin each country's stance.

Nissan, maker of the Leaf electric car and Z sports car, said in a statement regarding the justice official's trip that it hoped Ghosn would return to Japan to stand trial, “so that all the facts can be properly established under Japan’s judicial system."

Ghosn was arrested in late 2018 and is facing charges of under-reporting income and breach of trust. He says he is innocent. He led Nissan for nearly 20 years.

Having spent months in detention and struggled to gain his release on bail under stringent conditions, Ghosn said he fled in the belief he could not get a fair trial in Japan.

State Minister of Justice Hiroyuki Yoshiie, was to leave Japan for Lebanon on Saturday. He is expected to meet with the Lebanese justice minister on Monday.

Japan has requested Ghosn's return through Interpol and issued an arrest warrant after his escape.

Nissan's sales have plunged recently, and it sank into losses for the last fiscal quarter. Its brand has been tarnished.

Earlier this month, Nissan filed a civil damage lawsuit against Ghosn, seeking 10 billion yen ($90 million) in damages. The claim added the costs of what Nissan called Ghosn’s “corrupt practices,” such as rent for overseas property, use of corporate jets and payments for the internal investigation into wrongdoings.