The Swiss government has placed a ban on big events that will last until at least March 15. 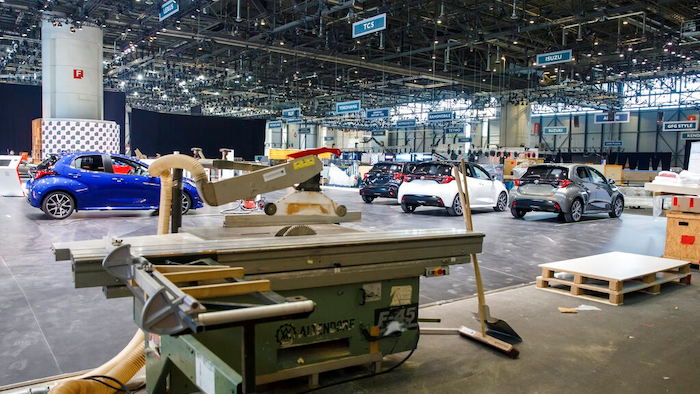 Cars are pictured as workers stop the preparation of the 90th Geneva International Motor Show, GIMS, at Palexpo, in Geneva, Switzerland, Friday, Feb. 28, 2020. The 90th edition of the International Motor Show, scheduled to begin on March 5th, is cancelled due to the advancement of the (Covid-19) coronavirus in Switzerland. The Swiss confederation announced today that all events involving more than 1,000 people would be banned until 15 March.
Salvatore di Nolfi/Keystone via AP

GENEVA (AP) — The Geneva auto show was canceled after the Swiss government put an immediate ban Friday on all public and private events involving more than 1,000 people in order to halt the spread of the new coronavirus.

The ban on big events will last until at least March 15, one of the latest major steps by governments to fight an outbreak that has infected more than 82,000 people and killed over 2,700 worldwide. The Swiss move highlights the growing impact of the virus on daily lives and livelihoods. Organizers of the annual Geneva International Motor Show, which was due to run March 5-15 and draws tens of thousands of visitors every year, confirmed the event would be nixed.

"We are aware that this measure will have a significant impact on public life,” said Switzerland's interior minister, Alain Berset.

“However, the move is expected to provide effective protection to people in Switzerland and to public health," he said. “It should prevent or delay the spread of the disease in Switzerland, thus reducing its momentum.”

Maurice Turrettini, chairman of the Geneva auto show's organizing company, GIMS, said that over 160 brands had been due to exhibit at the show, but it was a case of “force majeure,” a disruption that is out of people's control that can free businesses from liability in a contract.

Exhibitors will not be reimbursed, but ticket-holders will be. Turrentini said it's up to the exhibitors to decide whether to pay their staff, including models who help present the vehicles to gawking visitors.

"We had also a lot of pressure (over) the last few days because there were some brands saying, 'we are not coming, we are leaving,' and so forth — it was quite difficult," he said.

The event was expected to generate 200-250 million Swiss francs (dollars) worth of spending in the Geneva area.

Swiss authorities said that for events with fewer than 1,000 people, organizers “must carry out a risk assessment in conjunction with the competent cantonal (state) authorities to decide whether or not the event can be held."

Berset said that large offices or public buildings wouldn't be shut down by the measure.

Switzerland has reported 15 confirmed cases of the new coronavirus. It borders northern Italy, which has seen the largest cluster of cases in Europe.

The government defined the outbreak as a "special situation" - the second-highest of three levels in the country's epidemic law. The highest level, defined as an “extraordinary situation,” would be triggered for an event on the scale of the 1918 Spanish flu.

Aside from the auto show, affected events include the traditional Carnival procession in Basel, a ski marathon and several soccer matches. The national Swiss hockey league said all games this weekend will be played behind closed doors, with no fans present.

It wasn't immediately clear whether the ban would also affect meetings at the United Nations headquarters in Geneva. The global body has a special extraterritorial status that may exempt it from national health measures.

Rolando Gomez, spokesman for the U.N. Human Rights Council, said "well over 1,000 participants" were taking part in a four-week session that began Monday.

The council's top officials were holding a meeting to determine the impact of the Swiss announcement, he said.

It would reverse a Trump administration policy and could help usher in stricter standards nationwide.
Jun 3rd, 2021
Follow Us
Most Recent