Despite Strike, GM Turns Profit in 2019 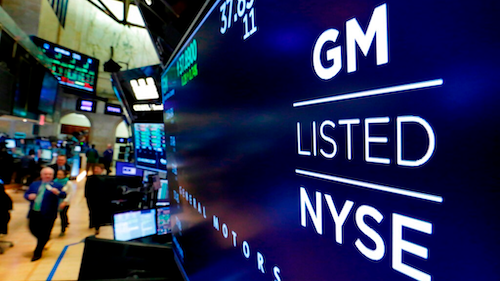 In this April 23, 2018, file photo, the logo for General Motors appears above a trading post on the floor of the New York Stock Exchange. Despite a 40-day strike by factory workers and slumping sales in the U.S. and China, General Motors still made money in 2019. The company posted a $6.58 billion profit for the year, but that was down almost 17% from 2018.
AP Photo/Richard Drew, File

DETROIT (AP) — Despite a 40-day strike by factory workers and slumping sales in the U.S. and China, General Motors still made money last year.

GM couldn't avoid red ink the fourth quarter, though. The automaker lost $232 million, or 16 cents per share, largely because most of the strike by the United Auto Workers union happened during the quarter.

Excluding one-time items for employee separations and the sale of a Chinese joint venture, GM made 5 cents per share, soundly beating Wall Street estimates. Analysts polled by FactSet expected a profit of 1 cent per share.

Revenue for the quarter was $30.8 billion, down almost 20% from a year ago. That fell short of Wall Street estimates of $31.2 billion.

The bitter strike paralyzed GM's U.S. factories and cut production in Mexico and Canada before it was settled.

GM said it expects pretax earnings of $5.75 to $6.25 per share this year, about flat with 2019 when strike costs and profits from its investment in the Lyft ride-hailing company and stock warrants in France's PSA Peugeot are backed out.

Government steps to stop the Coronavirus from spreading have forced GM to close 15 assembly plants there, and Suryadevara said it’s too soon to talk about how long it will take to reopen the factories. “We’ve activated contingency plans across the enterprise,” she said. “People are working around the clock here trying to mitigate the impact of this going forward. But it’s really early days and it’s very fluid.”