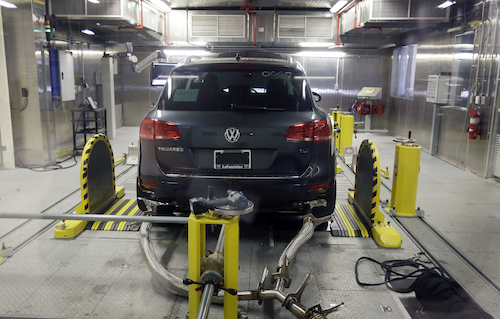 Volkswagen told the EPA and the California Air Resources Board the software is on about 85,000 Volkswagen, Audi and Porsche vehicles with 3-liter engines going back to the 2009 model year. Earlier this month the regulators accused VW of installing the so-called "defeat device" software on about 10,000 cars from the 2014 through 2016 model years, in violation of the Clean Air Act.

The regulators said in a statement they will investigate and take appropriate action on the software, which they claim allowed the six-cylinder diesels to emit fewer pollutants during tests than in real-world driving.

VW made the disclosure on Thursday, a day before it submitted plans to the EPA to fix a much larger problem — emissions-cheating software on 482,000 four-cylinder diesel cars.

The EPA said in a statement Friday night that VW had turned in its proposed fix, but the agency wouldn't give details. The EPA and CARB now will review the proposal, the statement said. VW said it is cooperating with regulators.

Any fix would almost certainly include a recall, with owners being asked to take their cars to dealers for repairs.

The allegation involving six-cylinder diesels means that more Volkswagen, Audi and Porsche owners could face recalls of their cars to fix the software, and VW could face steeper fines and more intense scrutiny from U.S. regulators and lawmakers.

Audi spokesman Brad Stertz on Friday conceded that VW never told regulators about the software, in violation of U.S. law. He said the company agreed with the agencies to reprogram it "so that the regulators see it, understand it and approve it and feel comfortable with the way it's performing."

Stertz said the software is legal in Europe and it's not the same as a device that enabled four-cylinder VW diesel engines to deliberately cheat on emissions tests. VW has told dealers not to sell any of the models until the software is fixed.

U.S. regulators continue to tell owners of all the affected cars they are safe to drive, even as they emit nitrogen oxide, a contributor to smog and respiratory problems, in amounts that exceed EPA standards — up to nine times above accepted levels in the six-cylinder engines and up to 40 times in the four-cylinders.

Stertz said it would cost in the "double-digit" millions of euros to reprogram all the software on the six-cylinder diesels.

The fix for the 2-liter four-cylinder diesels in cars such as the Audi A3 and the VW Beetle, Golf, Jetta and Passat likely will include software changes and in some models, complex and expensive modifications to the exhaust system. One possible fix, a larger trap to catch harmful nitrogen oxide, could hurt the cars' acceleration and fuel mileage. Another wouldn't harm performance but would require a clumsy tank to store the chemical urea, which is used to treat nitrogen oxide in the exhaust system. VW also could buy back some of the older cars, which date to the 2009 model year.

Also Friday, VW said it will cut its spending by 1 billion euros ($1.07 billion) next year and "strictly prioritize" investments as it shores up its finances to deal with its emissions-rigging scandal.