Made In Mexico, Popular On U.S. Highways

Many Americans have benefited from Mexico's emergence as a production hub. Low-cost production helps keep sticker prices lower on vehicles such as the Ford Fusion and Nissan Sentra. 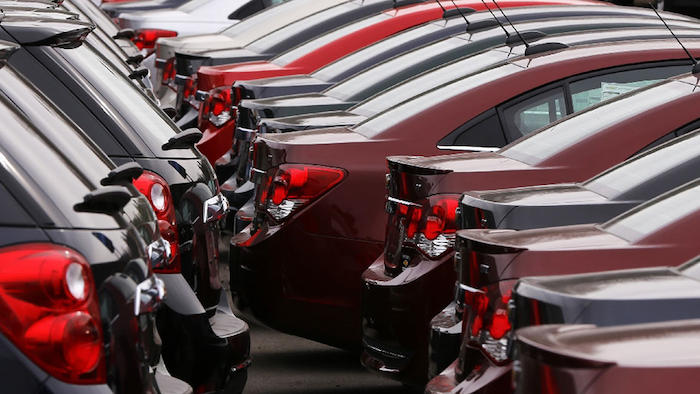 DETROIT (AP) — Some of America's most popular cars and trucks are made in Mexico — for now.

Many Americans have benefited from Mexico's emergence as a production hub. Low-cost production helps keep sticker prices lower on vehicles such as the Ford Fusion and Nissan Sentra.

But Mexico's growing share of the auto market is a sore spot for President Donald Trump, who has threatened to impose border taxes on Mexican imports to force companies to make cars in the U.S.

Under the North American Free Trade Agreement, Mexico's share of North America's vehicle production has risen to 20 percent from 3 percent three decades ago. It's expected to hit 26 percent by 2020, according to LMC Automotive, a forecasting firm.

The trade pact also contributed to a 30 percent decline in U.S. auto manufacturing jobs between 1994 and 2013, according to the nonpartisan Peterson Economic Institute, although factory automation played a role as well.

Ford Motor Co. has built the midsize Fusion sedan at its plant in Hermosillo, Mexico, since its introduction in 2005. In 2013, Ford added Fusion production to a plant in Flat Rock, Michigan. But car sales have been slipping as consumers gravitate toward SUVs, so Ford stopped making the Fusion in Michigan last year. The Fusion starts at $22,120.

The Ram pickup is Fiat Chrysler's best-selling vehicle. Fiat Chrysler makes some Rams at its 79-year-old truck plant in Warren, Michigan, a suburb of Detroit. But it has also made them in Saltillo, Mexico, since 1995, the year after NAFTA went into effect. The Ram 1500 pickup starts at $26,395.

The Silverado pickup is General Motors Co.'s best-selling vehicle. Most Silverados are made at plants in Flint, Michigan, and Fort Wayne, Indiana. But four-door crew cab versions are made at GM's assembly plant in Silao, Mexico, which opened in 1995. A Silverado crew cab starts at $36,840.

The Sentra small car was made in Smyrna, Tennessee, from 1985 to 2000, when it was moved to Aguascalientes, Mexico, so the Smyrna plant could make SUVs. Since then, Nissan Motor Co. has built a second plant in Aguascalientes to make Sentras for global export. Nissan is Mexico's market leader and the biggest automotive manufacturer in the country, with total production of 848,086 vehicles in 2016. The Sentra starts at $16,990.

The subcompact Nissan Versa went on sale in the U.S. in 2006. It's made at one of Nissan's two plants in Aguascalientes, Mexico. The Versa starts at $11,990.

The Jetta small car is Volkswagen AG's biggest seller in the U.S. It was made here briefly in the late 1980s before Volkswagen closed its plant in Pennsylvania. When Volkswagen built a new plant in Tennessee in 2011, it was intended for larger vehicles like the Passat sedan. Volkswagen has been making the Jetta in Puebla, Mexico, since 1993. In 2016, Volkswagen had the highest percentage of Mexican-made U.S. sales among major automakers, at 32 percent. The Jetta starts at $17,895.

Since its introduction in 2009, the Dodge Journey midsize SUV has been made at a Fiat Chrysler plant in Toluca, Mexico. The Toluca plant, which opened in 1968, has made numerous other vehicles over the years, including the Chrysler PT Cruiser. The Journey starts at $21, 145.

Like its corporate twin, the Chevrolet Silverado, the GMC Sierra is also built in Flint, Michigan and Fort Wayne, Indiana. Four-door crew cab versions are built in Silao, Mexico. The Sierra crew cab starts at $38,015.

When Toyota Motor Corp. introduced the midsize Tacoma pickup in 1995, it was made at a joint General Motors and Toyota plant in Fremont, California. In 2003, Toyota built a new plant in Baja California, Mexico, to expand Tacoma production. Toyota still makes some Tacomas in the U.S., but it moved production to San Antonio, Texas, in 2010 after selling the California plant to Tesla. The Tacoma starts at $24,320.

Ford reintroduced the subcompact Fiesta to the U.S. market in 2010. It's built at a Ford plant in Cuautitlan, Mexico, that opened in 1964 and used to build pickup trucks for the Mexican market. The Fiesta starts at $13,660.