November was a notoriously slow sales month until about five years ago, when car dealers joined other retailers in promoting Black Friday, according to Edmunds analyst Jessica Caldwell. 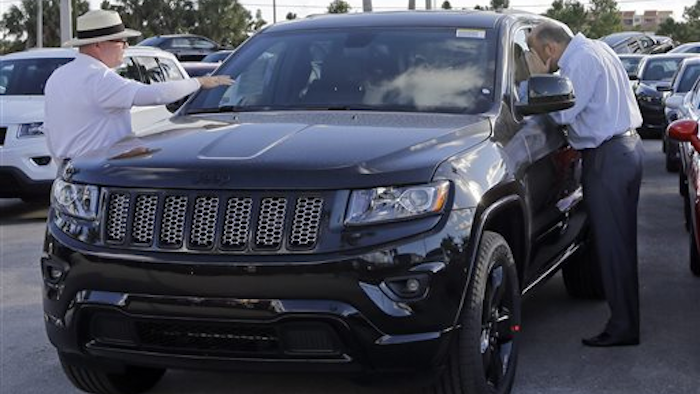 DETROIT (AP) — November used to be a slow month for U.S. car sales. Not anymore.

November was a notoriously slow sales month until about five years ago, when car dealers joined other retailers in promoting Black Friday, according to Edmunds analyst Jessica Caldwell. Now, like Amazon, Wal-Mart and others, dealers started promoting "Black Friday" deals as early as Halloween. Jeep offered zero percent financing for up to 75 months. GM teased savings of up to 20 percent of for its Buick, Chevrolet and GMC brands. Hyundai offered an extra $500 on the Sonata sedan between Nov. 20 and Nov. 30.

Ford's U.S. sales chief Mark LaNeve said sales got progressively stronger as November progressed, and the last day of the month was one of the best days this year.

Deals can be dangerous for the auto industry because they cut into profits and lower vehicles' resale value. Incentives have been creeping upward since 2011; in November, they rose an estimated $172 over last year to $3,066 per vehicle, according to the car buying site TrueCar.com.

But Eric Lyman, vice president for industry insights at TrueCar, says the gradual increase isn't a worrisome trend for the industry. For one thing, companies are making more profit per vehicle than they used to because they're selling more SUVs and trucks. The average sale price of a vehicle last month was $32,966, up 1 percent from the previous month.

Automakers are also trying to capture as many sales as they can in the boom years before sales inevitably slow. Rising interest rates, higher gas prices and other factors are all expected to stall auto sales sometime in the next few years.

"It's kind of like, make hay while the sun shines," Lyman said.

— GM's sales rose 1.5 percent to 229,296. Chevrolet and Cadillac brand sales were up but fell at Buick and GMC. Sales of GM's best-seller, the Silverado pickup, rose 5 percent.

— Toyota's sales rose 3 percent to 189,517. In a sign of the impact of lower gas prices, sales of the RAV4 SUV jumped nearly 30 percent while Prius hybrid sales were down 10 percent.

— Ford's sales were up less than 1 percent to 187,794. A 10-percent increase in F-Series pickup sales couldn't overcome lower sales of key vehicles like the Escape SUV and Fusion sedan.

— Honda's sales fell 5 percent to 115,441. The company was hurt by an 18-percent decline in sales at its Acura luxury brand.