Embattled Takata Corp. reported a half-year loss of 5.6 billion yen ($45.8 million) on Friday due to recall costs, as Toyota announced it would stop using Takata air bag inflators at the center of the company's massive product safety scandal. 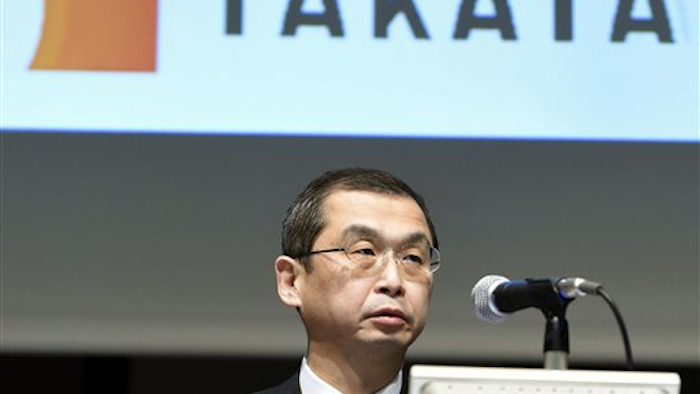 TOKYO (AP) — Embattled Takata Corp. reported a half-year loss of 5.6 billion yen ($45.8 million) on Friday due to recall costs, as Toyota announced it would stop using Takata air bag inflators at the center of the company's massive product safety scandal.

Tokyo-based Takata cut its profit forecast for the full fiscal year that will end in March by 75 percent, to 5 billion yen ($41 million) from 20 billion yen, reflecting the expense of recalls for defective air bags that affect millions of vehicles globally.

Takata's financial report capped a week of bad news for the company after at least three major customers, including Honda Motor Co., said they would stop purchasing the types of air bags involved in the recalls.

Takata had forecast a 7.5 billion yen ($62 million) net profit for the fiscal first half. Its net loss a year earlier was 35.2 billion yen.

On Tuesday, U.S. auto safety regulators fined Takata $70 million for concealing evidence for years that its air bags are prone to explode with grisly consequences. The defect is linked to eight deaths and more than 100 injuries worldwide.

The spate of bad news prompted heavy selling of Takata's shares, which fell 6.2 percent on Friday and lost nearly 40 percent for the week.

Takata has agreed to phase out air bag inflators that use ammonium nitrate, the propellant blamed for the explosions. It also agreed with the National Highway Traffic Safety Administration to a schedule for replacing many of the devices already in use over the next two years.

Takata uses the chemical ammonium nitrate to create an explosion that inflates air bags, but it can deteriorate over time, especially when exposed to moist air.

In the U.S., about 23.4 million Takata driver and passenger air bag inflators have been recalled on 19.2 million vehicles sold by 12 auto and truck makers. As of Oct. 9, only 22.5 percent of the recalled inflators had been replaced nationwide, but the pace is a bit faster in high-humidity states like Florida, which have been given priority.