A Georgia judge has cut the damages that Fiat Chrysler must pay the family of a child who died in a Jeep SUV fire from $150 million to $40 million. 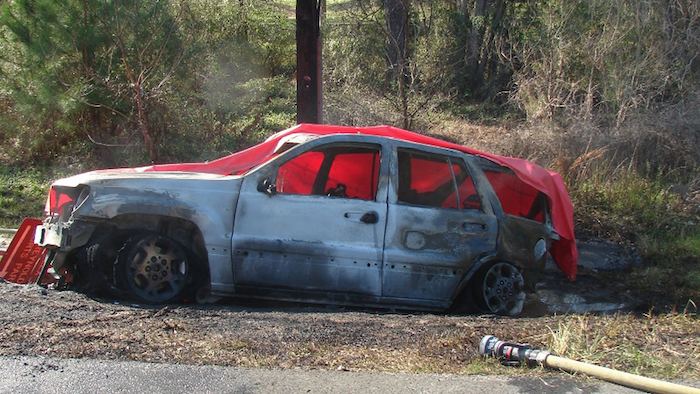 DETROIT (AP) — A Georgia judge has cut the damages that Fiat Chrysler must pay the family of a child who died in a Jeep SUV fire from $150 million to $40 million.

In a ruling issued Friday and made public Tuesday, Chason decided that the family of 4-year-old Remington Walden should get $30 million for his death and $10 million for pain and suffering. The ruling was accepted by the family's attorneys and opens a path for Fiat Chrysler Automobiles NV to appeal.

The company said in a statement that the ruling doesn't cure errors that tainted the verdict and denied it a fair trial, and that it is considering legal options.

Walden died after the Jeep Grand Cherokee driven by his aunt in Bainbridge, Ga., was hit from behind in March 2012 and exploded into flames. The Jeep's gas tank was mounted behind the rear axle, leaving it vulnerable in a rear crash.

A 12-person jury found Fiat Chrysler negligent and asked for $120 million for wrongful death and $30 million in pain and suffering following a seven-day trial in the rural southwestern Georgia community in early spring.

Earlier this month, FCA attorneys sought during a hearing to cut the judgment to $5 million to bring it in line with court-approved judgments in other Georgia cases. The attorneys contended that jurors acted with passion and prejudice against the Italian-American automaker, and they were irrational.

Chason, however, rejected those arguments, writing in his ruling that the evidence against FCA was overwhelming. "The court saw nothing to indicate, nor has it been presented with persuasive evidence or argument to suggest that the jurors were inflamed or irrational," Chason wrote.

Jim Butler Jr., the attorney for the parents of the victim, Remington Walden, told Chason during the hearing that $40 million for the wrongful death and $10 million for pain and suffering seemed fair.

At least 75 people have died in post-crash fires involving several Jeep models with the rear-mounted gas tanks. The problem has led to the recall of 1.56 million Grand Cherokees and Libertys to install trailer hitches to protect the tanks in low-speed crashes. Fiat Chrysler says the Jeeps are as safe as comparable SUVs from the same era.

Earlier this week, Fiat Chrysler agreed in a deal with government safety regulators to offer $100 gift cards to entice owners of recalled Jeeps into taking their SUVs to dealers to get hitches installed. The company also agreed to offer $1,000 above market value trade-in prices on a new vehicle to those who own 1993 to 1998 Grand Cherokees.

The Waldens' Jeep and other newer Grand Cherokees with rear-mounted tanks were not included in the recall.