The death toll in an explosion at a Chinese auto parts factory has risen to 75, as investigators fault poor safety measures and news reports reveal that workers had long complained of dangerous levels of dust at the facility. 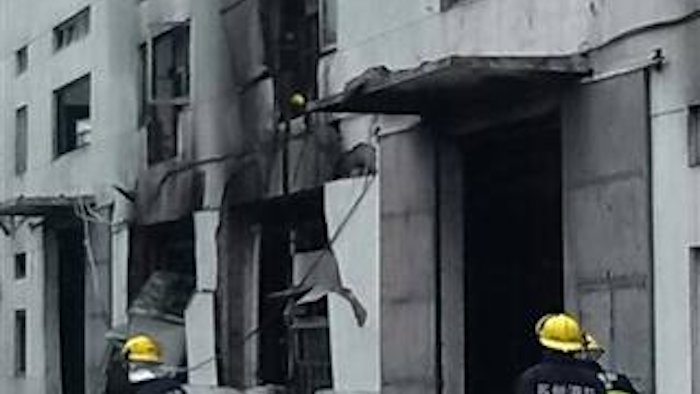 BEIJING (AP) -- The death toll in an explosion at a Chinese auto parts factory has risen to 75, as investigators fault poor safety measures and news reports reveal that workers had long complained of dangerous levels of dust at the facility.

Metal dust produced from polishing steel hubcaps ignited Saturday morning at the factory in the eastern Chinese city of Kunshan, causing an explosion that destroyed almost the entire roof of the plant, city officials said. More than 200 workers were at the factory at the time of the blast, China's most serious industrial disaster since a fire at a poultry plant killed 119 people in June last year.

The metallic dust stuck to the skin of workers, burning between 50 and 90 percent of their bodies, said Liu Wei, deputy chief of the health bureau in the city, located in Jiangsu province, about 1,000 kilometers (600 miles) southeast of Beijing.

The blast killed 75 people, state media said. Another 186 people were injured, most with severe burns.

State broadcaster CCTV showed footage of large plumes of thick, black smoke rising from the plant, and news websites posted photos of the dead or injured lifted onto the back of large trucks, their bodies black, presumably from burns or soot.

A preliminary investigation showed that the blast was likely a dust explosion, said China's official Xinhua News Agency. Chinese newspapers reported that workers at the factory had complained over the past years about layers of dust gathering on their work tables, and poor ventilation in the facility.

Jiangsu's provincial government website said Sunday that initial investigations by the Kunshan city government found that the factory was at fault in the dust explosion. It did not list specific safety measures that were not followed.

A dust explosion is caused by the fast combustion of particles suspended in air in an enclosed space. The particles could include dust or powdered metals such as aluminum. They would have to come into contact with a spark such as fire, an overheated surface or electrical discharge from machinery.

Such explosions have been blamed for other deadly fires in China. In 2012, a dust explosion at an aluminum lock polishing workshop in the eastern city of Wenzhou killed 13 people and injured 15. Three years earlier, aluminum powder exploded at an abandoned factory being rented out as temporary housing in the eastern city of Danyang, killing 11 people and injuring 20.

The factory involved in Saturday's blast is operated by the Kunshan Zhongrong Metal Products Company, which according to its website was set up in 1998 and has registered capital of $8.8 million. Its core business is electroplating aluminum alloy wheel hubs, and it supplies General Motors and other companies, the website said. Chinese state media said the factory was built with Taiwanese investment.

GM confirmed that Zhongrong is part of its network of suppliers. "We can confirm Zhongrong is a supplier to GM's global supplier Dicastal," GM said in a statement.

The company has struggled in recent years and is in the midst of an $11 billion restructuring plan.
Aug 4th, 2020
Follow Us
Most Recent