The biggest of three recalls posted by U.S. safety regulators is of 225,000 Santa Fe SUVs from 2001-2006 to replace front coil springs that can rust and crack in cold-weather states. The springs can fracture and make contact with a tire, potentially causing a crash. 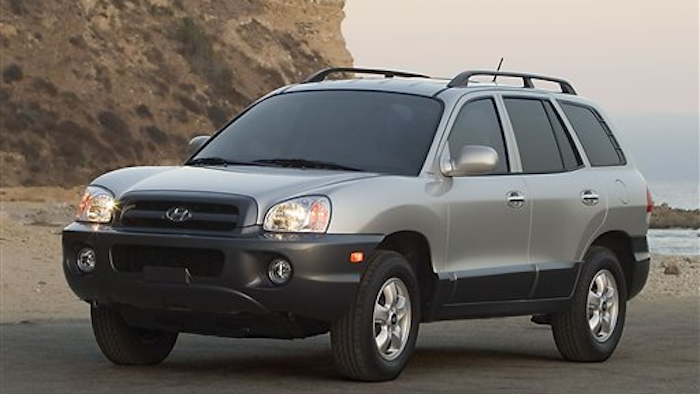 The biggest of three recalls posted Friday by U.S. safety regulators is of 225,000 Santa Fe SUVs from 2001-2006 to replace front coil springs that can rust and crack in cold-weather states. The springs can fracture and make contact with a tire, potentially causing a crash.

Hyundai said in documents posted by the National Highway Traffic Safety Administration that dealers will replace the springs for free. Owners will be notified by the end of September.

The company received 1,200 warranty claims for the problem, including 90 in which the springs came in contact with a tire. No crashes or injuries were reported.

The Korean automaker also is recalling 133,075 Sonata midsize cars from 2011 because brake fluid can leak and cause increased stopping distances.

The leaks are caused by an inadequate seal between brake hoses and calipers. Dealers will replace the hoses free of charge starting by the end of September. No crashes or injuries have been reported.

And Hyundai recalling 61,122 Veracruz SUVs from 2007 through 2012 because oil can leak from a valve cover gasket onto the alternator, causing it to fail. That could cause the engine to stall, and the driver wouldn't be able to restart it. No crashes or injuries were reported.

Dealers will inspect and replace or repair the alternator and front valve cover gasket starting by the end of September, at no cost to owners.

So far this year automakers have recalled more than 40 million vehicles in the U.S., passing the old full-year record of 30.8 million set in 2004. General Motors leads all companies with recalls of nearly 30 million vehicles. The company's recall crisis was touched off by the bungled recall of 2.6 million small cars for faulty ignition switches. GM has admitted knowing about the problem for more than a decade, yet it didn't start any recalls until this year. The company blames the defective switches for at least 13 deaths.