The leader of the tech giant's driverless car project wrote in a blog post Monday that test vehicles are becoming far more adept at city driving. They already can comfortably handle freeways. 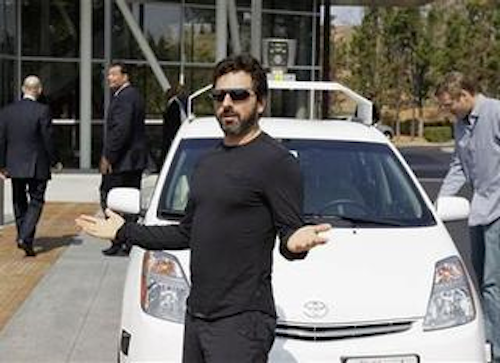 LOS ANGELES (AP) -- Google says it has turned a corner in its pursuit of a car that can drive itself.

The tech giant's self-driving cars already can navigate freeways comfortably, albeit with a driver ready to take control. But city driving — with its obstacle course of jaywalkers, bicyclists and blind corners — has been a far greater challenge for the cars' computers.

In a blog entry posted Monday, the project's leader said test cars now can handle thousands of urban situations that would have stumped them a year or two ago.

Urmson's post was the company's first official update since 2012 on progress toward a driverless car, a project within the company's secretive Google X lab.

The company has said its goal is to get the technology to the public by 2017. In initial iterations, human drivers would be expected to take control if the computer fails. The promise is that, eventually, there would be no need for a driver. Passengers could read, daydream, even sleep — or work — while the car drives.

Google maintains that computers will one day drive far more safely than humans, and part of the company's pitch is that robot cars can substantially reduce traffic fatalities.

The basics already are in place. The task for Google — and traditional carmakers, which also are testing driverless cars — is perfecting technology strapped onto its fleet of about two dozen Lexus RX450H SUVs.

Initially, those plots were fairly crude. A gaggle of pedestrians on a street corner registered as a single person. Now, the technology can distinguish individuals, according to Google spokeswoman Courtney Hohne, as well as solve other riddles such as construction zones and the likely movements of people riding bicycles.

To deal with cyclists, engineers initially programmed the software to look for hand gestures that indicate an upcoming turn. Then they realized that most cyclists don't use standard gestures — and still others weave down a road the wrong way.

So engineers have taught the software to predict the behavior of cyclists based on thousands of encounters during the approximately 10,000 miles the cars have driven autonomously on city streets, Hohne said. The software projects a cyclist's likely movements and plots the car's path accordingly — then reacts if something unexpected happens.

"A mile of city driving is much more complex than a mile of freeway driving, with hundreds of different objects moving according to different rules of the road in a small area," Urmson wrote.

Before recent breakthroughs, Google had contemplated mapping all the world's stop signs. Now the technology can read stop signs, including those held in the hands of school crossing guards, Hohne said.

While the car knows to stop, just when to start again is still a challenge, partly because the cars are programmed to drive defensively. At a four-way stop, Google's cars have been known to wait in place as people driving in other directions edge out into the intersection — or roll through.

The cars still need work on other predictably common tasks. Among them, understanding the gestures that drivers give one another to signal it's OK to merge or change lanes, turning right on red and driving in rain or fog (which requires more sophisticated sensors).

And when will these and other problems be solved?

"You can count on one hand the number of years until people, ordinary people, can experience this," company co-founder Sergey Brin said in September 2012. He made the remarks at a ceremony where California Gov. Jerry Brown signed legislation legalizing the cars on public roads in the state.

To date, Google's cars have gone about 700,000 miles in self-driving mode, the vast majority on freeways, the company said.

California's Department of Motor Vehicles is in the process of writing regulations to implement that law. Nevada, Florida, Michigan and Washington, D.C., also have written driverless car laws.

Google has not said how it plans to market the technology. Options include collaborating with major carmakers or giving away the software, as the company did with its Android operating system. While Google has the balance sheet to invest in making cars, that likelihood is remote.

Traditional automakers also are developing driverless cars. Renault-Nissan CEO Carlos Ghosn said he hopes to deliver a model to the public by 2020.