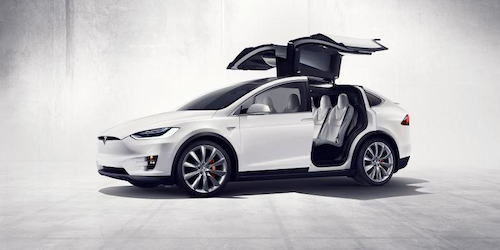 The Tesla Model X is the latest electric car from Tesla Motors.

Tesla Motors reported a loss for the eleventh quarter in a row, the company announced in an earnings presentation on Wednesday. However, stock in the company rose more than 10 percent after news that Tesla will beef up its deliveries this year bolstered faith in the company’s plans.

The electric car maker reported a fourth-quarter loss of almost $320.4 million, triple the previous report. That works out to be $2.44 per share. Net loss was $107.6 million, or 86 cents per share, one year earlier in December of 2014.

Some of the optimism in the face of the continuing loss comes from Tesla’s sunny disposition about its next moves. The ‘Gigafactory’ currently under construction in Nevada is expected to produce enough batteries to support 500,000 cars per year, including the Model X sport utility vehicle and the upcoming Model 3.

Tesla expects to deliver about 16,000 vehicles this quarter, an increase of 60 percent compared to last year.

The Model 3, Tesla’s first mass-market vehicle, is expected to be unveiled on March 31, at which time reservations will also be open. Deliveries are expected to begin in “late 2017”.

Starting at $35,000, the Model 3 could cost as low as $22,100 when tax incentives are factored in. That number is based off of the lowest possible rate, available in Louisiana; on average, tax incentives could take $10,000 off the sticker cost, resulting in a price of $25,000. The adoption of a mass-market car and ramping up of production at the Gigafactory could determine whether Tesla takes its place as a behemoth alongside traditional car companies, or whether continued loss will shake the public’s faith in this particular type of electric automobile.