States should move quickly to replace their old, diesel-fueled bus fleets with electric-powered buses to help wean the country off fossil fuels. 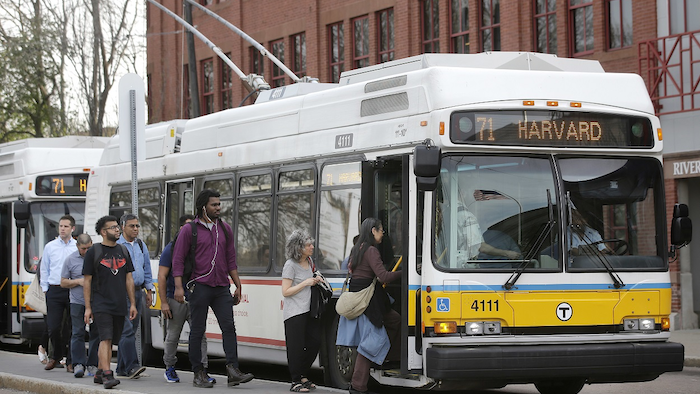 In this Wednesday, May 2, 2018 photo passengers board a bus powered by electricity supplied through overhead wires, in Watertown, Mass. Image credit: AP Photo/Steven Senne

States should move quickly to replace their old, diesel-fueled bus fleets with electric-powered buses to help wean the country off fossil fuels.

That's the conclusion of a report released Thursday by the Massachusetts Public Interest Research Group in Boston. The report was authored by the U.S. PIRG Education Fund and the Frontier Group, a liberal-leaning think tank.

The consumer advocacy group's report argues that buses that run on diesel and other fossil fuels harm public health and contribute to climate change by pumping out millions of tons of greenhouse gas emissions each year.

More than 60 percent of the nation's nearly 70,000 transit buses run on diesel, and another 18 percent on natural gas, while just 0.2 percent are all-electric, the report said.

When it comes to school buses, the reliance on diesel is even higher, with about 95 percent of the nation's school buses running on the fuel.

There are also potential health benefits from switching to electric buses.

The report says that the harmful effects of diesel exhaust from buses increase because they are typically used in areas where there are lots of people, including densely populated urban neighborhoods and on busy roads.

It also notes that many buses follow the same routes over and over means that people in those areas are repeatedly exposed to exhaust.

The report argues that the switch to electric buses makes fiscal as well as environmental sense, with each electric school bus saving districts nearly $2,000 a year in fuel and $4,400 in reduced maintenance each year.

The Chicago Transit Authority said that the estimated annual net savings in fuel costs for each electric bus is $25,000 — or about $300,000 over the expected 12-year lifespan of each bus.

The authority also estimates that the reduction in harmful emissions will cut down on certain illnesses and respiratory diseases.

The move to electric buses in already underway in several other states.

In Massachusetts, with the help of a Federal Transit Administration grant, the Massachusetts Bay Transportation Authority is in the process of finalizing a contract for the production of five 60-foot long, articulated electric buses and five charging stations.

The transit authority is also planning to purchase hundreds of new buses that will be a combination of battery/electric and diesel/hybrid.

In New York City, transit officials are eyeing plans to convert the city's public bus system to an all-electric fleet by 2040.

And in California, the Los Angeles Department of Transportation is hoping to use a $36 million grant to buy 112 zero-emission buses as part of the city's goal of reaching an all-zero emission bus fleet by 2030.