Britain's car industry, which employs 814,000 people, illustrates the struggle the country faces as it prepares to exit the EU. 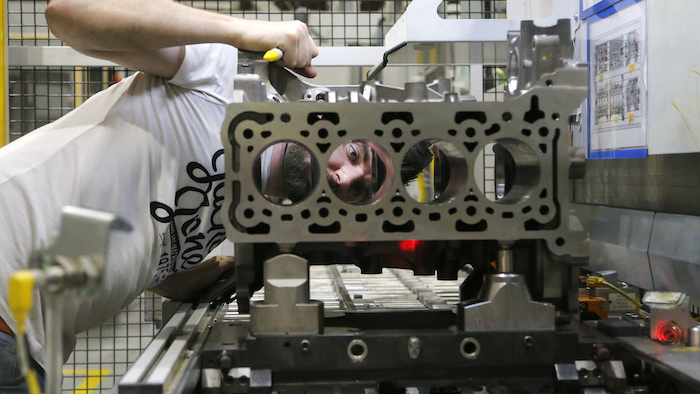 The U.S. carmaker has invested $2.5 billion in the plant, where 3,150 people churn out an engine every 30 seconds. And they've been here a long time: Edsel Ford, son of founder Henry Ford, personally cut the sod to start construction of the company's U.K. manufacturing headquarters in 1929.

It's hard to imagine Ford would walk away from all that if Britain fails to negotiate a favorable trade deal when it leaves the European Union.

But don't bet on it. With auto parts passing through as many as 15 countries before a car is completed, a Brexit agreement that results in new tariffs that increase the cost of Ford vehicles for consumers is no small problem.

"It will force us to consider what the longer-term options are for the investments that we make, because let me be clear: We have to transact business in an environment where we can be competitive, and it's that competitive base that we're interested in making sure is protected," said Steven Armstrong, CEO of Ford in Europe.

Britain's car industry, which employs 814,000 people, illustrates the struggle the country faces as it prepares to exit the EU.

Cars are assembled, not forged in a single place. Modern manufacturing techniques result in carmakers having plants in several locations, often in different countries, that specialize in producing pieces of the finished vehicle. For instance, the plant in Dagenham, in east London, makes nothing but diesel engines and parts.

Tariffs, which are non-existent for goods that move from one EU nation to another, are an oversized threat to British carmakers because they could be applied each time those components cross and re-cross international borders on their way to the new car showroom.

"The country has high-tech assembly, a good presence of supply chain, links to Formula One teams that add to innovation — it does have a lot to recommend it," said David Elmes, an expert on global energy and corporate change at the Warwick Business School. "But access to the European market is a concern."

Those concerns can be seen by following the movements of one component throughout the manufacturing process.

Take engine assembly 0117A17201110027GK3Q 6007DC on the line at Dagenham, which will eventually power a Transit van. The unit is accompanied by a "birth history," a passport of sorts, that chronicles where and when every component was installed. The summary alone is 56 pages long.

This passport traces the block's world travels from its "birth" as a cylinder block in Cologne, Germany, through Belgium and Holland and finally on to Dagenham. It will get a new "stamp" when the block is shipped back over the English Channel and across Europe to Turkey, where it will become part of a rear-wheel drive vehicle. Some of those vans then cross back across the U.K. border for a third time for sale — and theoretically each time it crosses, it could be taxed after Brexit.

British carmakers, and many other industries, want the government to negotiate an agreement that preserves free trade with the EU's single market after Brexit. Failure to do so could mean that tariffs and quotas are applied according to World Trade Organization rules, which would make each vehicle more expensive.

WTO rules could raise the cost of finished vehicles by 10 percent, says Mike Hawes, chief executive of the Society of Motor Manufacturers and Traders. "That could potentially flow through to about 1,500 pounds ($1,920) on the price of any vehicle, any imported vehicle from Europe sold in the U.K. So that would be a difficult and substantial cost to mitigate and clearly it would be to a large extent passed on to the consumer."

The industry relies on Europe as both a market and a supplier, with the EU accounting for 56 percent of U.K. car exports and 69 percent of imports in 2016, according to the SMMT. Besides that, Europe supplies the majority of components within U.K.-built vehicles. 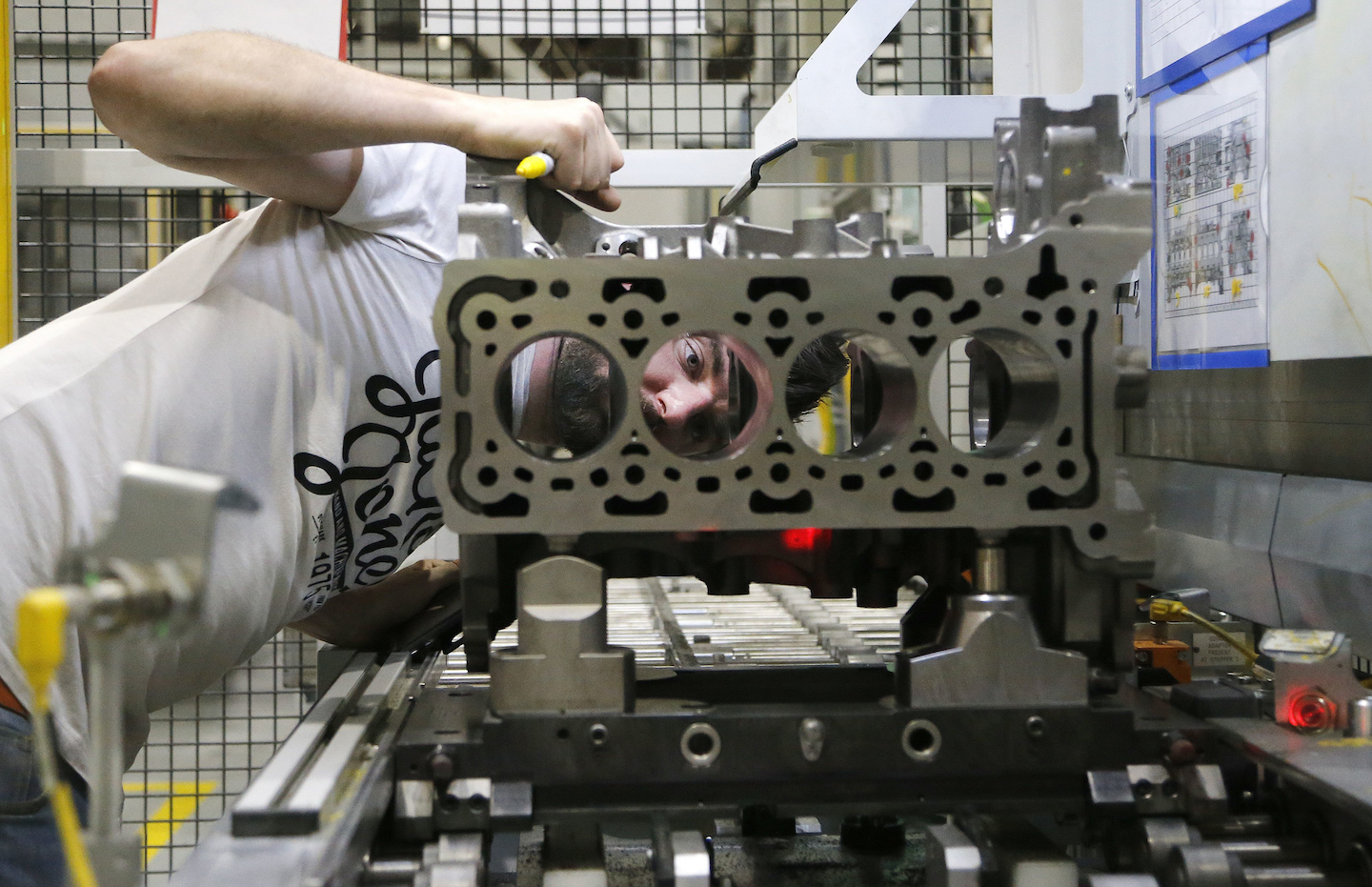 Ford wants to know how the government plans to address this issue — and soon.

"We want access to the single market, we want a frictionless ability to move goods from the U.K. to Europe and back again, and we need some clarity on how that's going to be delivered from the government," Armstrong said. "That's what we really want."

Prime Minister Theresa May has repeatedly said that remaining in the single market is not an option, but the government this month outlined its hopes for an agreement that would permit the "freest and most frictionless possible trade" with EU member states. This could include a temporary customs union with the bloc for up to three years after Britain leaves in 2019 to give businesses time to adjust to the new rules. Negotiations are set to begin again the week of Aug. 28.

A transition period may be crucial for carmakers because they will have to adjust to new borders at a time of dramatic change for the industry.

Carmakers globally are rushing to build more electric vehicles, requiring significant long-term investments. Britain currently makes more than 2.5 million engines a year but just under 13,000 electric cars, and the government wants to ban the sale of new diesel-powered cars and vans by 2040. There are also concerns the car market may not grow as much as ridesharing schemes become more popular.

Against this backdrop, Brexit raises a question for carmakers: where to invest in future technologies.

In one positive sign, Germany-based BMW recently decided to build its electric versions of the Mini in England.

To encourage more such investment, the government could provide incentives to manufacturers and support technology, said Darren Jukes, head of the industrial products group at consulting firm PwC. The dramatic changes ahead driven by new materials and technology offer a chance to seize the moment.

"We have a clean sheet of paper," Jukes said. "What we have to do now is think about not just the next generation but the generation after that."

The change isn't lost on the workers at the Ford's Dagenham operations. There have been cuts and change over decades in the community immortalized in the movie "Made in Dagenham," a film about a strike by female workers in 1968 over equal pay. The word "competitive" comes up often in conversation.

Plus all they have to do is look around — robots do much of the work. In places where a human being is required, a computer is often nearby to correct mistakes.

The uncertainty of Brexit worries people like Samy Alakarsamy, who has proudly worked for Ford for 35 years. For him, the debate is more about location than politics. Moving to, say, Germany, is just not on the cards for the 56-year-old.

"I hope the future is here,'" he said while a conveyor belt of unfinished cylinder heads whirled around him. "That's all I'm interested in."