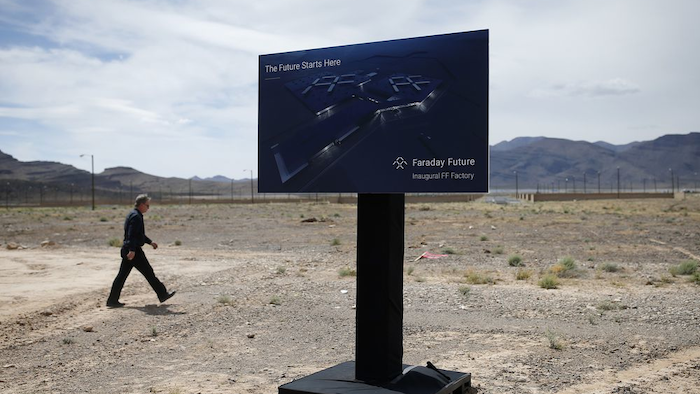 A man walks by a sign at an event to mark the start of construction for Faraday Future in North Las Vegas, Nev. (AP Photo/John Locher)

An electric car maker deserted its plan to construct a $1 billion manufacturing plant in southern Nevada in a move experts say could spell trouble for the company and the broader niche electric automobile industry.

The decision to scrap the plant was due to a shift in business strategy, Faraday Future Chief Financial Officer Stefan Krause said Monday. The Gardena, California-based company said in a statement that it will look for an existing facility to produce its electric vehicles in California or Nevada.

Faraday Future halted work on the project outside Las Vegas last November, at the time calling the stoppage a "temporary adjustment" that would not affect plans to begin production in 2018. It sunk more than $120 million into the project.

"It can be somewhat hard to believe that a company that was so aggressively spending money and moving things forward in their claimed goals will suddenly change direction and still get to where they want to get to," said Karl Brauer, executive publisher at Autotrader and Kelley Blue Book. "You kind of don't know — is this just an adjustment or is there going to be a freefall here?"

He and others who closely watch the industry said the decision comes amid several industry changes that could drastically affect companies like Faraday and Tesla that offer uniquely all-electric lineups. Established car companies are releasing more electric options and it's unclear whether President Donald Trump's administration will continue tax breaks that incentivize the industry and motivate buyers.

"I think the next 12 months are going to be very telling," Brauer said. "It could drastically change the look of the electric car industry."

Faraday's announcement came days after reports that a Shanghai court froze more than $180 million in assets belonging to one of the company's biggest backers, tech billionaire Jia Yueting. The company said that Jia's financial problems were not related to the decision.

Jia stepped down last week from the helm of the publicly traded arm of LeEco, the Beijing-based conglomerate he founded over a decade ago. At the same time, he reaffirmed his commitment to Faraday Future.

The company is attempting an exceptionally expensive feat — one that Tesla has not pulled off, Autotrader executive analyst Michelle Krebs said. 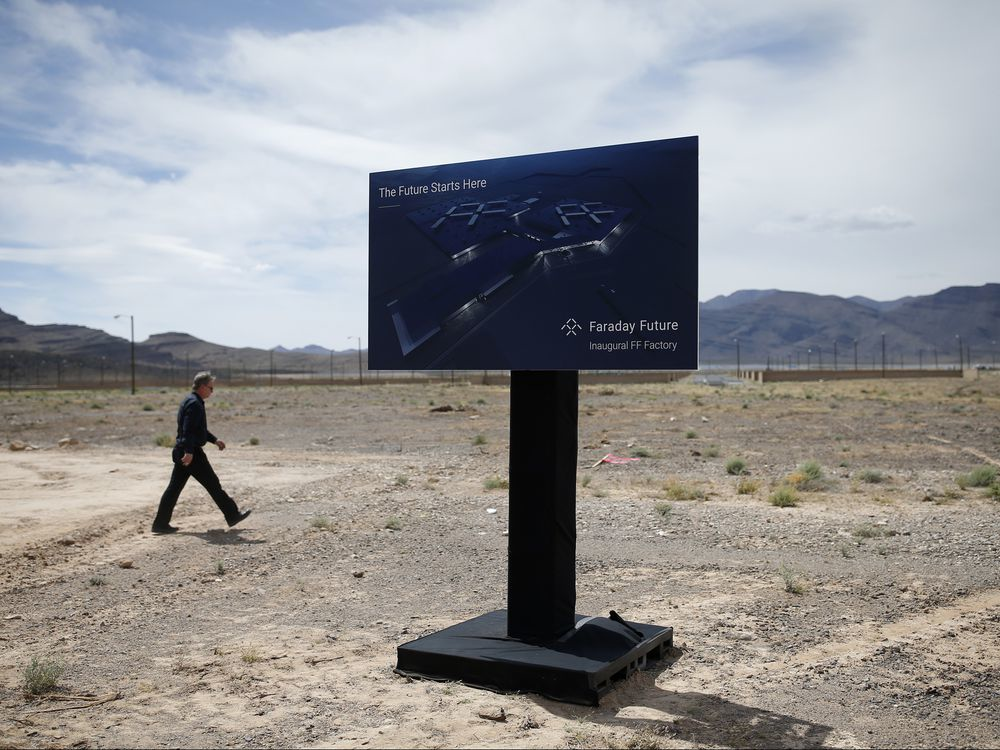 A man walks by a sign at an event to mark the start of construction for Faraday Future in North Las Vegas, Nev. (AP Photo/John Locher)

"Tesla has sold vehicles, but it's not made any money, and that whole segment is not doing particularly well," Krebs said. "You've got an industry that is capital-intensive and you've got an electric-vehicle market that is kind of shaky, so those two things probably are at play."

With electric vehicles in particular, she said, there's no sign that there will be a big payoff anytime soon, "there's just never enough cash."

Thousands of jobs had been anticipated to come with the construction and launch of the proposed plant on a 900-acre site at the Apex Industrial Park in North Las Vegas.

State Treasurer Dan Schwartz, a critic of the project, blamed state officials for giving false hope that the plant "would magically create 4,500 jobs."

Nevada had pledged $335 million in incentives to the company but had not yet spent any taxpayer money on the project, according to Steve Hill, director of the Governor's Office of Economic Development.

The state, recognizing both the opportunity and risk of the endeavor, required the company to invest at least $1 billion before it received the tax breaks and infrastructure improvements approved by lawmakers in 2015, Hill said.

"The history of this industry is littered with grand startups that never came true," Brauer said. "Faraday has all the earmarks of one of those companies that promises you the world but doesn't necessarily deliver it."