Automatic braking is already available in dozens of car models, but typically as a pricey option on higher-end vehicles. 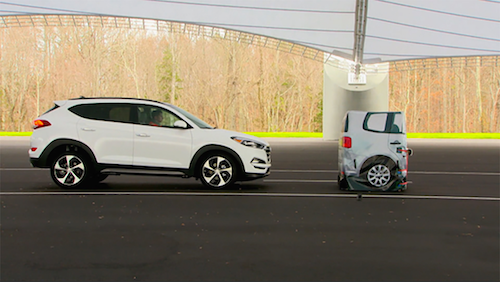 A vehicle closes in on a Strikeable Surrogate Vehicle (SSV) at the IIHS Vehicle Research Center in Ruckersville, Va. (Insurance Institute for Highway Safety via AP)

Federal regulators and the auto industry are taking a more lenient approach than safety advocates like when it comes to phasing in automatic braking systems for passenger cars, according to records of their private negotiations.

The technology automatically applies brakes to prevent or mitigate collisions, rather than waiting for the driver to act. It's the most important safety technology available today that's not already required in cars.

Such systems should be standard in all new cars, says the National Highway Traffic Safety Administration. But instead of mandating it, the government is trying to work out a voluntary agreement with automakers in hopes of getting it in cars more quickly.

But safety advocates say voluntary agreements aren't enforceable and are likely to contain weaker standards and longer timelines than if the government had issued rules.

"Consumers are going to come up the losers in this process," said Clarence Ditlow, executive director of the Center for Auto Safety.

Meeting minutes obtained by The Associated Press of three of the meetings that NHTSA has held with automakers since October show the government is considering significant concessions.

Records of the third negotiating session, on Nov. 12, show that automatic braking systems would be allowed that slow vehicles by as little as 5 mph before a collision. Manufacturers would be allowed to exempt 5 percent of their vehicles from the standard. The discussion included an additional exemption for models that manufacturers intend to phase out or redesign.

The minutes don't specify a model year by which the technology would have to be included in cars. The group did decide that discussion of any deadline would begin with "the latest date submitted by any automaker" for when they would be ready to make the change.

The agency is required by law to provide meeting minutes of such negotiations and to make them public. Only minutes from the first meeting were in the agency's public docket, but a NHTSA spokesman provided minutes to the other two meetings in response to a request from the AP.

Minutes to a fourth meeting were unavailable, the AP was told. 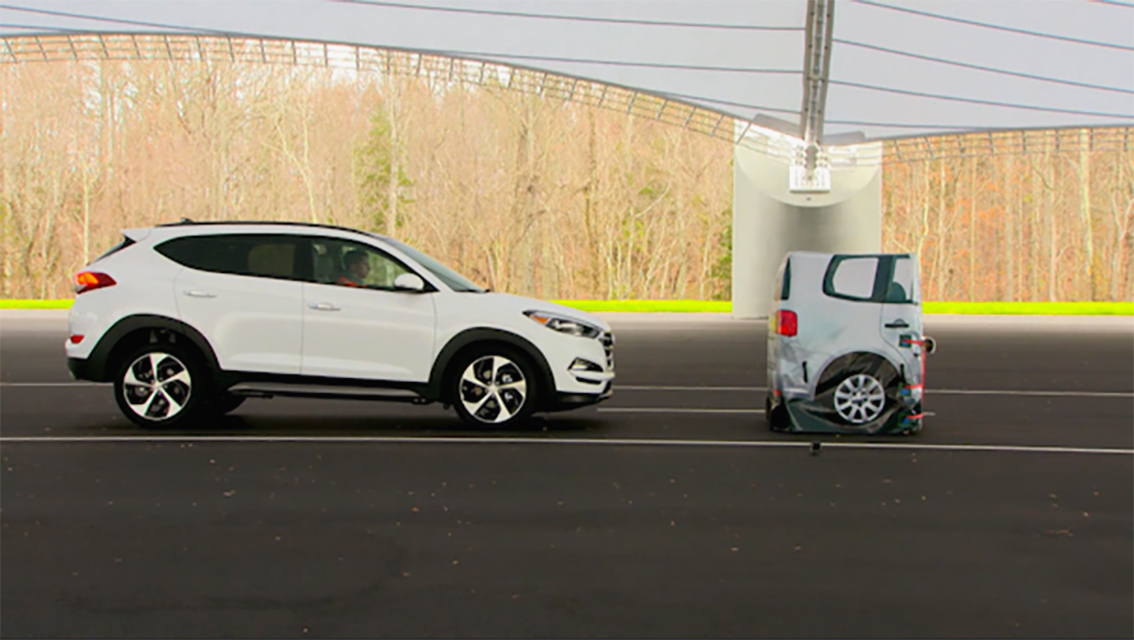 A vehicle closes in on a Strikeable Surrogate Vehicle (SSV) at the IIHS Vehicle Research Center in Ruckersville, Va. (Insurance Institute for Highway Safety via AP)

Mark Rosekind, NHTSA's administrator, has said the federal rule-making process is so cumbersome and time-consuming that a voluntary agreement is likely to get the technology into all cars faster. He said regulations remain an option.

The Association of Global Automakers, which has taken the lead for the industry on the issue, didn't immediately reply to a request for comment.

"Regulations can be too rigid when technology like this is changing quickly," said Russ Rader, a spokesman for insurance institute. "A complicated regulation could make it more difficult for the automakers and their suppliers to continue to develop the systems."

Safety advocates who met with Rosekind this week said he told them he hopes to wrap up negotiations on a voluntary agreement within the month. Safety groups have filed a petition asking NHTSA to issue regulations instead.

Automatic braking is already available in dozens of car models, but typically as a pricey option on higher-end vehicles. Subaru offers it on the Impreza sedan, for example, as part of a $2,895 safety package.

Claybrook acknowledged that federal rule-making is too slow, largely because of White House insistence on elaborate cost-benefit analyses of potential safety rules. But she said automatic braking could move more quickly because the technology is available and the government wouldn't have to prove its feasibility. The insurance institute has done extensive testing and analysis of its benefits, she added.

There are about 1.7 million rear-end crashes a year in the U.S., killing more than 200 people, injuring 400,000 others and costing about $47 billion annually. More than half of those crashes could be avoided or mitigated by automatic braking or systems that warn drivers of an impending collision, NHTSA estimated.

The technology holds the potential to significantly reduce what the insurance industry pays in damage and injury claims. Some insurers offer discounts to customers whose cars have automatic braking. But many don't because it's difficult to verify the presence of an optional system and because there are so many different name brands for the technology that it's hard to determine which ones are most effective.

NHTSA announced last year that it will include automatic braking and other collision-avoidance technologies in its five-star safety rating program to encourage automakers to more widely adopt the technology.

In an unusually pointed criticism, the National Transportation Safety Board, which investigates accidents and makes safety recommendations, said in a report last year that "slow and insufficient action" by NHTSA to develop performance standards for automatic braking and collision warning systems and to require the technologies in cars and trucks "has contributed to the ongoing and unacceptable frequency of rear-end crashes."