At least eight people have been killed and 100 injured by the defective air bags. 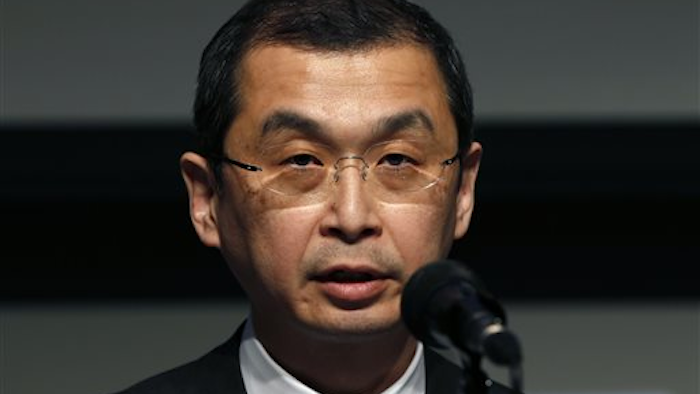 The CEO of Takata Corp., the Japanese air bag maker at the center of a defect scandal that has resulted in recalls of more than 33.8 million vehicles, appeared at a news conference Thursday for the first time since the problems emerged but shed little light on the underlying cause of the problems.

Earlier, Shigehisa Takada apologized to shareholders at their annual meeting. He then faced media questions, bowing in apology both before and after the news conference.

"We apologize deeply for the great amount of concern and inconvenience we have caused to everyone," he said.

Toyota said it was recalling another 2.86 vehicles globally. In an emailed statement, the company said the recalls did not expand the models affected but broadened the manufacturing periods involved. Some 1.729 million of those vehicles were sold in Europe. Nissan said it was recalling an additional 198,000 vehicles built between April 2007 and December 2008.

At least eight people have been killed and 100 injured by the defective air bags, which can explode with excessive force, firing shrapnel into the vehicle. The problem has persisted for over a decade, affecting 11 automakers including Honda, BMW and Toyota.

Takata said the exact cause was still under investigation.

"We are a company that should be providing safety. Our product quality should be assured," he said. "What I must do now is to handle the problem properly and deliver safety to our customers. That is my priority, first and foremost."

A chemical inside the inflators of the air bag can kick in with too much force, blowing apart the metal inflator and sending shards flying. Exposure to moisture for extended periods appears to trigger the problem.

Takata's air bags have been installed in more than 50 million vehicles worldwide. The company says it has changed its air bag design and is no longer using the batwing-shaped inflator that was involved in the eight fatal accidents and most of the injuries.

The Japanese company faces a huge financial burden in responding to the crisis, but says its banks have been supportive.

Takata refused comment on the total cost of the quality problems.