Toyota President said he believes the exec had no intention of breaking the law. 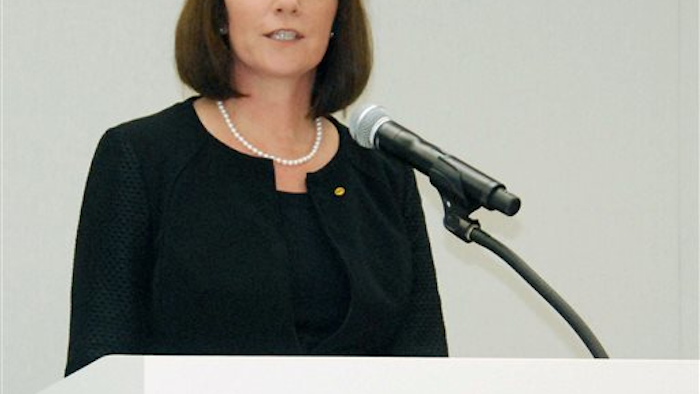 Julie Hamp, Toyota's head of public relations and its first senior woman executive, was arrested Thursday on suspicion of importing the painkiller oxycodone. She was the first foreign Toyota executive to be fully stationed in Japan, and was in the process of moving her belongings from California.

At a hastily called news conference Friday, Toyoda bowed briefly and apologized for the troubles set off by the arrest of Hamp, who was tapped as Toyota's chief communications officer in April.

He said the company should have done more to help with Hamp's relocation. He declined to go into details of the police allegations, only repeating several times that the company was cooperating fully with the investigation.

The drug was found by customs officials in a package Hamp sent to herself by air mail from the United States, according to police. Japanese media reports said the drugs were hidden in various parts of a jewelry box.

The high-profile stumble of a media-savvy executive, so early in the game, is an embarrassment for the world's top-selling automaker. Toyota had highlighted Hamp's appointment with much fanfare as a sign that it was promoting diversity.

Toyoda said he had picked Hamp, 55, because of "her character." She was an excellent leader, communicating well with Japanese employees, he said.

"For me and for Toyota, she is an indispensable and precious teammate," he told reporters. "I believe that we will learn that she had no intent to violate the law."

He acknowledged that her appointment had been a "big step" in a globalizing Toyota. Although Japanese Toyota officials had gone abroad to live, she was the first foreign Toyota executive to be fully stationed in Japan.

It was unclear when she might be released. Japanese authorities can detain suspects without charge for up to 23 days.

Japan has strict controls over drugs. Possession of marijuana, for instance, is a serious crime. Foreigners being detained for mailing or bringing in medicines they used at home is not unheard of. Such drugs may be banned in Japan or require special approval.

The U.S. Embassy in Japan warns on its Internet site that Americans can be detained for bringing in prescription drugs that may perfectly legal in the U.S.

Earlier this year, Oregon woman Carrie Russell, 26, was detained for 18 days in Japan over a shipment of prescription Adderall for attention-deficit disorder. The drug is commonly prescribed in the U.S. but contains amphetamines, which are outlawed in Japan.

She had come to Japan to teach English and shipped in the unopened package of pills that her mother had sent from the U.S. to South Korea. U.S. Ambassador to Japan Caroline Kennedy worked for Russell's release.

Japan's government has been beefing up its crackdown on drug abuse this year.

About 250 cases of drug smuggling are recorded a year, according to recent government data, with about half of cases involving foreigners including Americans. It is unclear which ones were over prescription drugs.

Public relations experts say Hamp may have to resign because, even if it turns out to be an honest mistake, it's still a mistake and one that reflects lack of awareness about a country she would be expected to have some familiarity with.

Before joining Toyota in 2012, Hamp worked for PepsiCo Inc. and General Motors Co. She oversaw marketing and communications for the Toyota, Lexus and Scion brands in the U.S. before her latest promotion.

Toyota employees are held to a high ethical standard, and run-ins with the law, even minor misdemeanors, are rare and seen as a disgrace.

Toyoda, who faced criticism for being slow in reacting to the Toyota's recall crisis of several years ago, emphasized he was responding quickly to the Hamp news.

"We still don't have all facts, and what I can say is limited. But I felt it's critical to tell you my thoughts in my own words," said Toyoda.