Japan's transport ministry said Friday it has ordered air bag maker Takata to conduct an internal investigation after cases of its air bags exploding triggered safety concerns in the United States and other countries. The ministry also ordered Takata and Japanese automakers to... 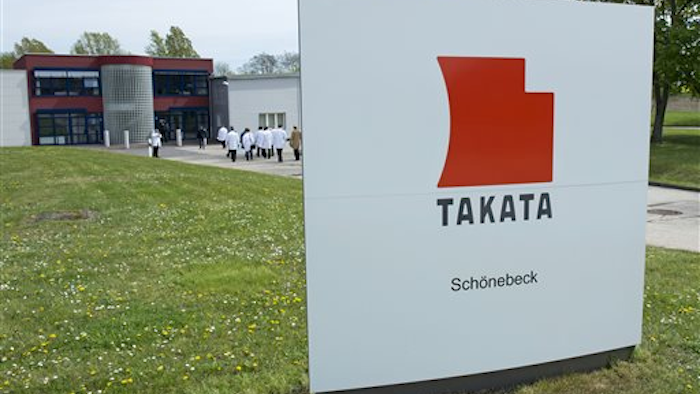 Japan's transport ministry said Friday it has ordered air bag maker Takata to conduct an internal investigation after cases of its air bags exploding triggered safety concerns in the United States and other countries.

The ministry also ordered Takata and Japanese automakers to study whether additional recalls are needed in Japan following a U.S. decision to expand recalls nationwide from an earlier measure limited to high-humidity zones.

Takata air bags can inflate with excessive force, sending metal shrapnel toward the driver and passengers. The problems have been blamed for at least six deaths and dozens of injuries. Millions of cars have been recalled worldwide.

"We have been rigidly dealing with the case, for instance directly instructing Takata to investigate and provide explanation," Transport Minister Akihiro Ohta told a regular news conference.

"This is an extremely important issue involving automobile safety, and we must take utmost steps."

Direct instructions from the ministry to an auto parts maker, rather than through automakers that use the parts, are a rare step.

Takata said it could not immediately confirm the ministry's instructions or their details.

Eight million cars with Takata air bag inflators have been recalled in the U.S., and more than 12 million worldwide, and there could be more with expanded recalls.

During a congressional hearing in Washington on Thursday, Hiroshi Shimizu, Takata's head of quality, repeatedly apologized for the problems.