Michelin's 10th plant in South Carolina, opening Thursday, will produce the company's innovative airless radial tire and develop the concept's future generations, company officials told The Associated Press in advance of a news conference. Commercial production of the Tweel, named to reflect the... 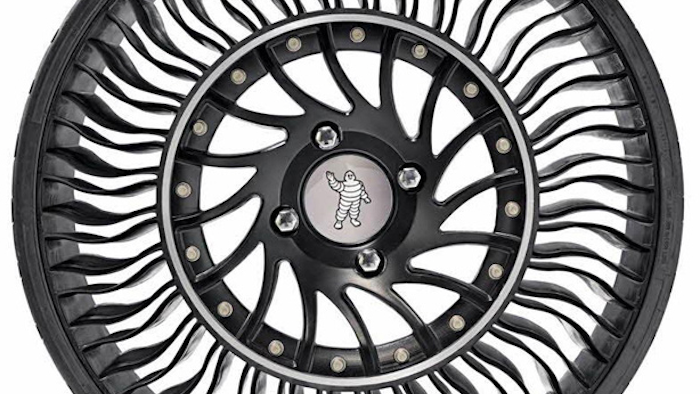 Commercial production of the Tweel, named to reflect the tire and wheel combination, comes nearly 10 years after Michelin introduced it as a concept at the North American International Auto Show in Detroit. But the entire development process, from concept to prototype to pilot, occurred in Greenville, home to the company's second-largest research center worldwide, said Pete Selleck, chairman and president of Michelin North America.

The $50 million investment, which includes a year-long renovation of a former textile warehouse, brings the company's total investment in South Carolina over the last five years to $2 billion, Selleck said.

The first Tweel made at the plant came off the line earlier this month, he said. He described the expected production level as "not very high," though he declined to be specific.

That number is not what's meaningful, he said.

"This is an innovation story. When you're in innovation, you're doing things that are very expensive and have relatively long returns," Selleck said. "This could in fact replace the radial tire down the road, but we just don't know."

The facility's purpose will be not only to produce the Tweel but also further develop it and a more cost-effective manufacturing process.

Meanwhile, Selleck called airless tires a potential game-changer for the "high-flat segment." Vehicles on construction sites tend to get a flat tire weekly; the airless Tweel doesn't get flat and can be retreaded several times, Selleck said.

He described the technology as operating like an upside-down suspension bridge, with the polyurethane spokes system supporting the wheel structure.

Michelin's next logical step is to produce Tweels for all-terrain vehicles, he said.

While the company has plans to expand its Tweel operations should the technology take off, Selleck's not saying if that will be in South Carolina.

"Those are highly confidential, but we are thinking ahead. We are planning for the next two plants, if in fact this continues to move forward," he said.

Michelin first located in South Carolina in the mid-1970s. The state is now home to half of Michelin's 20 plants and more than 40 percent of its workforce in North America.

Four other tire companies have announced plans for new plants or expansions in the state in the last few years.

Earlier this week, Bridgestone celebrated the opening of its 1.5 million-square-foot radial tire plant in Aiken County. The company's second plant in the county makes tires used in mining that are considered the world's biggest. The plant was announced in 2011, along with the expansion of its existing plant.

About 2,000 people currently work at both Bridgestone plants; an additional 200 are expected to be hired over the next several years, Commerce Department spokeswoman Allison Skipper said.

Continental Tire also announced plans in 2011 to build a new plant, promising to create 1,600 jobs in Sumter in 10 years. More than 500 are employed there so far, Skipper said.

Earlier this year, both Trelleborg Wheel Systems, whose parent company is based in Sweden, and Singapore-based Giti Tire announced plans to build their first North American manufacturing plants in South Carolina.

Nearly 90,000 tires already are produced daily in South Carolina, which surpassed Oklahoma last year to be first in tire production. The state also ranks first in exporting tires, according to the state Commerce Department.