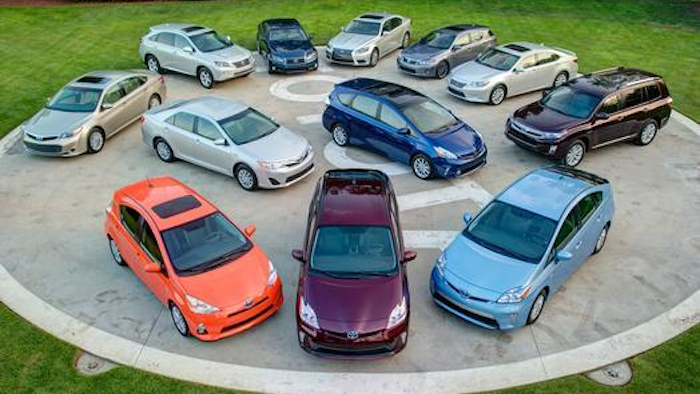 “Hitting the 7 million mark represents our customers’ recognition of the benefits of Toyota and Lexus hybrid vehicles,” said Bob Carter, Toyota senior vice president of automotive operations. “The appeal of excellent fuel economy, driving dynamics, and the quality of our vehicles combined with our dealers’ dedication to customer service makes Toyota the undeniable leader in hybrid technology.”

Including hybrid vehicles launched this year, Toyota will introduce a total of 15 new hybrids globally through 2015.  Hybrids launched this year comprise the Voxy Hybrid and Noah Hybrid in Japan only (January), and the Lexus NX 300h (July). This month Toyota will introduce the Lexus RC 300h. Toyota plans to continue expanding its hybrid lineup and increase the number of countries and regions where it sells hybrid vehicles.

In 2000, Toyota introduced its Prius hybrid to the U.S., a marquee vehicle that established mainstream adoption of hybrid technology. Today, Toyota and Lexus hybrid sales in the U.S. are well over 2 million, and the Prius is on its way to becoming the no. 1 selling vehicle in California for the third year in a row.

By achieving global mass-market appeal, Toyota hybrids have created a significant positive impact in gasoline consumed and emissions generated by driving. To date Toyota hybrid vehicles have resulted in approximately 49 million fewer tons* of CO2 emissions and saved 4.75B gallons of gasoline than would have been emitted or used by gasoline-powered vehicles of similar size and driving performance.

Although Toyota provides consumers a portfolio of options, including pure electrics and a fuel cell that will go in sale in summer 2015, hybrids will remain its core technology. Toyota therefore plans to continue working to enhance performance, reduce costs and expand its product lineup to create vehicles popular with consumers.