Shares of Tesla Motors jumped almost 4 percent Thursday after the electric car maker's CEO hinted at introducing new technology next week. Elon Musk took to Twitter late Wednesday with a message that said: "About time to unveil the D and... 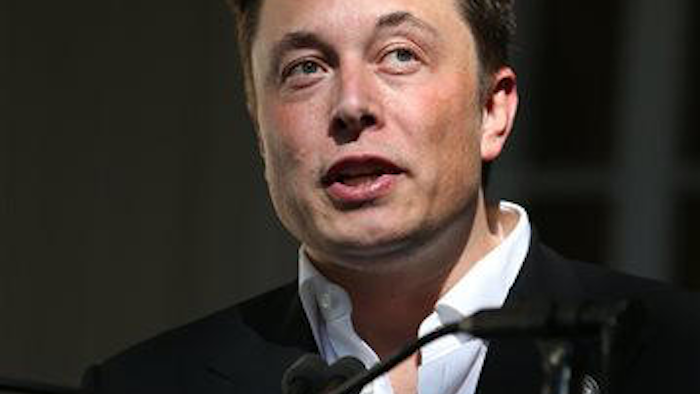 Elon Musk took to Twitter late Wednesday with a message that said: "About time to unveil the D and something else." Also included was a photograph of the front of a vehicle peeking out from under a partially opened garage with a large letter "D'' on the front of it. The photo also has the date Oct. 9.

Shortly after, Musk sent another tweet in which he said he was laughing about some of the comments being made online speculating on what the "D'' might be. He also said: "Glad I didn't mention the other letter!"

Several media reports suggest that the "D'' may have to do with a driver-assist feature or with an all-wheel drive system for the Model S.

Tesla Motors Inc., based in Palo Alto, California, currently makes one vehicle — the Model S sedan which starts at $70,000 — and is developing two others. Its Model X crossover is due out next year, and Tesla wants to start making a cheaper model by 2017. The company hopes to introduce its Model 3 in 2017. That vehicle is expected to be about half the starting price of its luxury sedan.

Musk's comments come amid the Paris Motor Show, a time when European carmakers are hoping to impress with new models. The biennial Paris show, which opens to the public on Saturday, runs through Oct. 19.

Tesla did not immediately respond to an email seeking comment.