Ford Motor Company is investing in the future as it begins installing LED lighting at manufacturing facilities across the globe. The new lights, valued at more than $25 million, will save energy and money while improving safety and lighting... 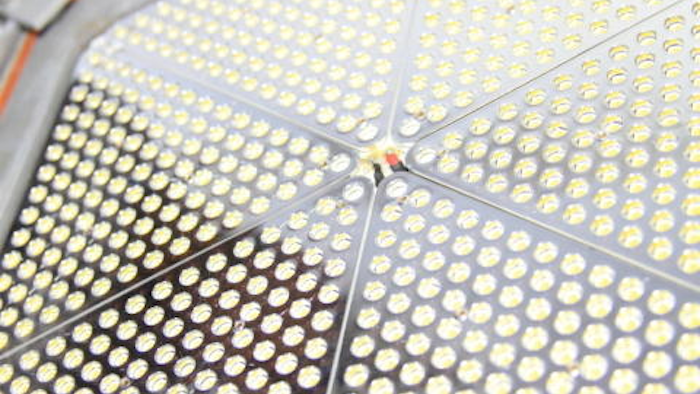 Ford Motor Company is investing in the future as it begins installing LED lighting at manufacturing facilities across the globe. The new lights, valued at more than $25 million, will save energy and money while improving safety and lighting quality.

The 25,000 new LED fixtures will replace traditional high-intensity discharge and fluorescent lights, and are expected to reduce Ford’s energy use at manufacturing facilities by 56 million kilowatt-hours annually – enough to power more than 6,000 average-sized homes per year.That equates to an up to 70 percent reduction in lighting energy consumption compared to traditional technologies.

Annual energy costs are expected to be reduced by approximately $7 million.The need for maintenance will diminish, as LED lighting has a 15-year life expectancy. Studies show LED light output remains steady at less than 1 percent degradation per year over the life of the equipment, while fluorescent and HID fixtures require re-lamping in as little as two years.

"We are extremely pleased to install this leading-edge technology in our manufacturing facilities worldwide,” said John Fleming, executive vice president, Global Manufacturing and Labor Affairs. “This is a long term investment in our future that highlights our aggressive approach to lead in environmental improvements and achieve operating efficiencies.”

In 2011, Ford embarked on an aggressive program to lower its energy use 25 percent per vehicle produced at its facilities by 2016. The company is well on its way toward meeting that goal, having achieved a 20 percent energy efficiency already, explained George Andraos, director of energy and sustainability at Ford Land. The switch to LED lighting helps to ensure Ford will meet its target.

“Moving to LED gives us impressive efficiency improvement,” said Andraos. “Ford worked closely with its scientists and suppliers to investigate and closely follow the rapid development of LED lighting. In 2013, we selected Dialight, a leading LED industrial fixture manufacturer with a global footprint, to develop light fixtures that meet Ford’s global needs.”

“Ford has a deep commitment to the environment,” said Donna Inch, chairman and CEO of Ford Land. “By creating outstanding products, investing in the facilities where our employees work, and using such technology as LED lighting, we are helping to promote a sustainable future.”

Recently, Ford also announced that it will work with DTE Energy to install Michigan’s largest solar carport at its Dearborn world headquarters. When completed in early 2015, the project is expected to generate 1.3 million kilowatt-hours annually, enough energy to power 159 average-sized homes for a year.