Marketing Of Detroit Heats Up Despite Bankruptcy

Convincing top executives that Detroit is a comeback city where they should hold company meetings and conventions could only be characterized as the most monumental of pitches or the slickest of con jobs.But Bill Bohde, senior vice president for sales and marketing at the Detroit Metro Convention & Visitors Bureau, is plowing ahead with a $1.6 million marketing campaign. 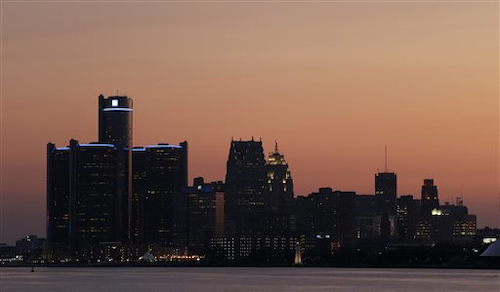 DETROIT (AP) -- Convincing top executives that Detroit is a comeback city where they should hold company meetings and conventions could only be characterized as the most monumental of pitches or the slickest of con jobs.

But Bill Bohde, senior vice president for sales and marketing at the Detroit Metro Convention & Visitors Bureau, is plowing ahead with a $1.6 million marketing campaign even as the city is trying to become the largest in the U.S. to enter bankruptcy.

"People were inquiring: How can you talk about a great comeback city when you just filed for bankruptcy?" said Bohde, referring to the campaign's kickoff during a trade show in Atlanta this summer.

He had to convince savvy business leaders that Detroit's July 18 bankruptcy "filing has nothing to do with the city and the development going on right now."

"To the general public, it is confusing," he said.

There are no smoke and mirrors when it comes to Detroit, the one-time manufacturing marvel of the world that over the past half-century has lost more than 1 million people, tens of thousands of jobs and now straddles the final ladder rung above insolvency. Far too many neighborhoods are crumbling and violent crime continues to rank among the worst in the nation.

There is some glitter to the rusty-knuckled town, but it's primarily downtown where three casinos, two professional sports stadiums and a strong restaurant district welcome residents and visitors.

A $600,000 campaign funded by businesses and touting a brighter future for Detroit has appeared in full-page ads in The New York Times, The Washington Post and other publications.

Despite the glossy paper and slick online videos, Detroit's dirty laundry is open for all to see.

"That's the problem. The whole country knows what's going on," said Jennifer Barbee, Texas-based tourism development consultant. "You can't invite someone to your mansion in foreclosure and expect that to be OK. The comeback is a smart campaign, but not yet. You have to be real right now."

The state took over Detroit in March when it hired turnaround expert Kevyn Orr as emergency manager. Orr has said Detroit's debt is at least $18 billion. The city has defaulted on millions of dollars in bond payments and could be forced to sell off assets like treasured artwork to pay creditors.

"We had an opportunity to tell them the other side of the story," he said. "We have to get people to understand that the bankruptcy has no impact on anything else in our tourism product. This town is not going to fail, but the financial issues have to be addressed."

The bureau's operations are funded from a 2-percent assessment charged on every hotel room. Its "comeback city" campaign is the most expensive undertaken in years.

"So far, we've only had a couple of members ask about the current situation in Detroit," said John Graham, chief executive of the American Society of Association Executives. "Most of the cities we go to have many of the same issues. In Detroit, they get a lot more press."

All cities hosting the annual convention must raise funds — in cash or in-kind — for receptions and parties for 5,000 people. Detroit has raised about $3 million for an event that could generate $17 million in spending by conventioneers.

The convention and visitors bureau also sweetens the pot. Transportation to and from the airport or around town, as well as hotel costs, can be subsidized. Complimentary floor space at Cobo also is offered.

"We have brought boards in here and put them up in hotels, wined and dined them, took them to ball games," said Bohde. "Most major destinations do something like this."

It's also cheaper to party in Detroit. For the American Society of Association Executives, hotel room savings are up to 15 percent over previous host cities, Graham said.

With fewer people living and working in Detroit there is a lot of shoulder room on sidewalks and more than enough uncongested streets.

"I would prefer Detroit above Chicago for ease of access," said Dave Breslin, Great Lakes sales executive for Alabama-based AngelTrax. "In Chicago, traffic is a nightmare. I've done Portland, Providence. I would say Detroit is as good as any major city. It's unfortunate what's going on now."

AngelTrax sells mobile surveillance equipment for buses, ambulances and police cars. It was an exhibitor at a two-day summer conference at Cobo. Changes still are needed, especially when it comes to union rules at the convention center, Breslin added.

He said exhibitors had to pay $140 to have props and other equipment carried in and out of Cobo.

"I was surprised in the lower parking garage there were two people to handle the parking: one to hand you the ticket and one to push the button to open the gate. I said 'no wonder they are broke,'" Breslin said.