TX Man May Be Latest Victim Of Exploding Airbags

Federal safety regulators are looking into the death of a Texas man who may be the latest victim of exploding automobile airbags made by Takata Corp. of Japan. The man, identified by authorities as Carlos Solis, 35, died in a low-speed crash in the Houston area when an airbag inflated and sent shrapnel into his... 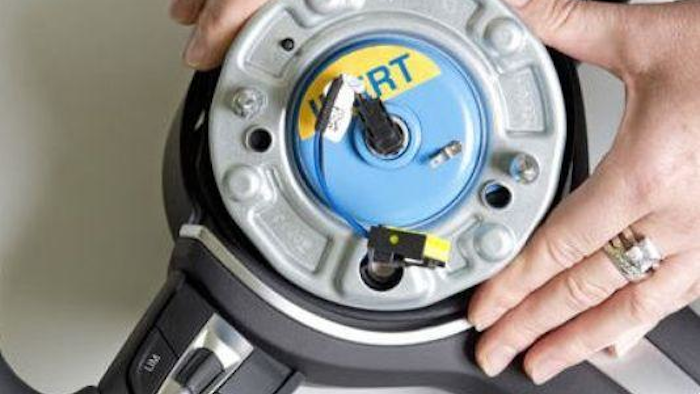 Federal safety regulators are looking into the death of a Texas man who may be the latest victim of exploding automobile airbags made by Takata Corp. of Japan.

The man, identified by authorities as Carlos Solis, 35, died in a low-speed crash in the Houston area when an airbag inflated and sent shrapnel into his neck, U.S. Senator Bill Nelson, D-Fla., said Thursday on the Senate floor.

The National Highway Traffic Safety Administration said it was gathering information on the crash, which involved a 2002 Honda Accord and occurred Jan. 18. Honda said in a statement that the car was part of a 2011 national recall to fix the driver's airbag inflators, but records show the repairs had not been made. The company urged anyone with a vehicle recalled for airbag problems to take cars to dealers as soon as possible.

If authorities determine that the airbag inflator mechanism caused Solis' death, he would be the sixth person killed because of the problem, according to Nelson. Four victims were in the United States, while another was in Malaysia.

Inflators made by Takata can explode with too much force, blowing apart a metal canister and sending fragments into the passenger compartment. Nelson, who serves on a committee that's investigating the airbag deaths, said documents submitted by Takata show that 64 people have been injured by the faulty inflators in the U.S. and its territories. The government and Takata say prolonged exposure to high humidity can make the airbag inflator propellant burn too fast, causing it to blow apart the canisters.

Christina Garza, a spokeswoman for the Harris County Sheriff's Office in Texas, confirmed that the crash took place at 9:45 p.m. in the Houston suburb of Spring. Solis was trying to turn left into an apartment complex parking lot when he hit another vehicle, according to the sheriff's office.

The airbag in Solis' Honda inflated, and a deputy who responded to the accident "observed he had a large open wound to his neck," Garza said.

A preliminary report by the Harris County Institute of Forensic Sciences lists Solis' cause of death as "blunt force injuries of the neck." But an exact determination of what caused the neck injuries was not immediately known. A final autopsy report has not been completed, said Tricia Bentley, a spokeswoman for the institute.

Nelson said Solis was traveling with an 11-year-old cousin at the time of the wreck.

In a statement, Takata offered condolences to Solis' family and said the company is working with Honda "to determine the facts and circumstances surrounding the vehicle's status."

A Honda spokesman said in an email that the Accord equipped with a Takata driver's side airbag was purchased on April 25, 2014. Honda mailed recall notification letters to the previous owner starting in 2011, but it had not yet sent a letter to the current owner, spokesman Chris Martin said.

In testimony to a Senate committee in November, a Honda executive proposed laws requiring that cars under recalls for safety problems be repaired before states allow registration to be renewed.

NHTSA and the Justice Department are investigating whether Takata concealed information about the faulty inflators from the federal safety agency. The agency has asked current or former Takata employees to come forward with information and is offering legal protection.

Nelson revealed the death while giving an update on the Commerce Committee's probe into the airbags. Nelson said the number of injuries from the problem is greater than previously thought.

One of the deaths and 18 of the injuries occurred in Nelson's home state of Florida, which leads the nation, he said. The committee, he said, is awaiting further information from Takata. The injury toll came from volumes of documents that Takata submitted at the committee's request, Nelson said.

Ten automakers have recalled about 12 million vehicles in the U.S. and about 19 million globally for problems with Takata airbag inflators.