After a decade of spiking fatalities from passenger car wrecks, the Brazilian government said Monday it plans to build its first auto crash test facility in an effort to improve the poor safety record of vehicles built and sold in the world's fourth-largest automobile market. 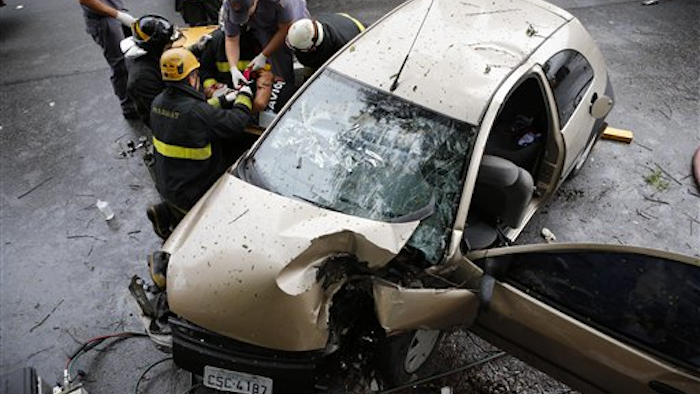 SAO PAULO (AP) -- After a decade of spiking fatalities from passenger car wrecks, the Brazilian government said Monday it plans to build its first auto crash test facility in an effort to improve the poor safety record of vehicles built and sold in the world's fourth-largest automobile market.

The decision comes a month after The Associated Press published an investigation that showed many cars built by the world's biggest automakers and sold in Brazil had significantly fewer safeguards than the same or similar models sold in the U.S. and Europe.

The AP found that Brazilians die at four times the rate as Americans in passenger car wrecks and that fatalities rose more than 70 percent in Brazil in the past decade while falling 40 percent in the U.S. Independent tests have been conducted in Germany on Brazil's most popular car models, and the results are bleak. Four of Brazil's five top selling cars failed their crash tests — the fifth has yet to be tested.

Dr. Dirceu Alves at Abramet, a Brazilian association of doctors who specialize in treating traffic accident victims, said he thinks a crash-test center will improve safety.

"There is no doubt about the importance of this lab. We cannot believe in the quality controls of the automakers alone," he said. "We believe it will be one of the factors in reducing the number of traffic fatalities."

The Brazilian government has recently begun to implement tougher safety standards for its auto industry. But critics have pointed out that without its own crash test center, the government has no means of verifying automaker claims on impact safety.

"Until now, when it came to the auto industry there was nothing the government was testing," said a Brazilian government official, who agreed to discuss the situation only if not quoted by name because he wasn't authorized to talk about the crash-test center plans.

The official said the government hopes to have the $50 million crash test center operating by 2017. He noted it was a "politically sensitive" topic in a nation where the auto industry plays a big role in the economy. Brazil's government has repeatedly slashed consumer taxes on cars in recent years in an effort to bolster the nation's economic outlook.

A second official, from the Ministry of Development, Industry and Foreign Trade, which will oversee the building and operation of the crash-test center, also confirmed plans for its construction.

A ministry document indicating plans for the center indicates that it will be built on the outskirts of Rio de Janeiro and that automakers could provide part of the funding for its operation and even use the center, which led experts to raise concerns about whether the lab can truly be independent. Further details about the center were not given.

ANFAVEA, Brazil's national association of automakers, said it had no comment about plans for the center. In talking to the AP previously about Brazil's poor safety record, automakers said their cars meet the country's safety laws.

As one example, only next year will Brazil begin requiring frontal air bags and antilock braking systems on all cars — safety features that have been standard in industrial countries for years.

Brazil, Latin America's biggest economy, will also have new impact regulations, on paper at least. But without a crash-test center, regulators cannot verify automakers' claims about vehicle performance. There are no independent labs in the nation, as there are in Europe, U.S. and other areas.

Auto engineers, some working for big automakers, have said the dangers of Brazilian cars come down to basics: the lack of body reinforcements, lower-quality steel in car bodies, weaker or fewer weld spots to hold the vehicles together and car platforms designed decades before modern safety advances.

Consumer advocates in Brazil have complained about what they say is a double standard in the treatment of carmakers. Manufacturers earn a 10 percent profit on Brazilian-made cars, compared with 3 percent in the U.S. and a global average of 5 percent, according to IHS Automotive, an industry consulting firm.

Despite those profits, cars like the Nissan March compact sold in Brazil received a two-star rating from the Latin New Car Assessment Program, which has carried out crash tests on cars made in Brazil. The version sold for about the same price in Europe, the Micra, scored four stars. Safety experts say that's the difference between dying in or surviving frontal-collision wrecks.

There is cautious hope the planned government crash-test center will begin improving autos, but some experts warned that it isn't a complete solution.

"It's a good thing that there will be an independent crash laboratory, but that doesn't mean that cars will be better or safer," said Alejandro Furas, technical director for the Global NCAP. "A crash laboratory is an incredible tool, but there have to be regulations — regulations in Brazil are behind."

Most notably, Brazil's auto safety regulation lacks a "conformity of production" clause that requires automobile safety performance be spot checked for the entire time the model is produced. Without that rule, car models in Brazil only have to meet impact regulations once.

Further, Furas said that if automakers helped fund the Brazilian government's facility, then it won't be "really independent at all."

About 40 million Brazilians moved into the middle class during the past decade with more income than ever to buy their first car. But as auto sales boom in Brazil, so have the number of accidents and deaths.

An analysis of Health Ministry data shows that 9,059 car occupants died in vehicle crashes in Brazil in 2010. That same year, 12,435 people in the U.S. were killed in car crashes, although the U.S. passenger car fleet is five times larger than Brazil's. The result: Brazilian automobile crash victims died at four times the rate as those in the U.S.