Southwest to Share $125M from Boeing Settlement with Workers

Without the planes, Southwest has said that it will cancel about 175 flights each weekday. 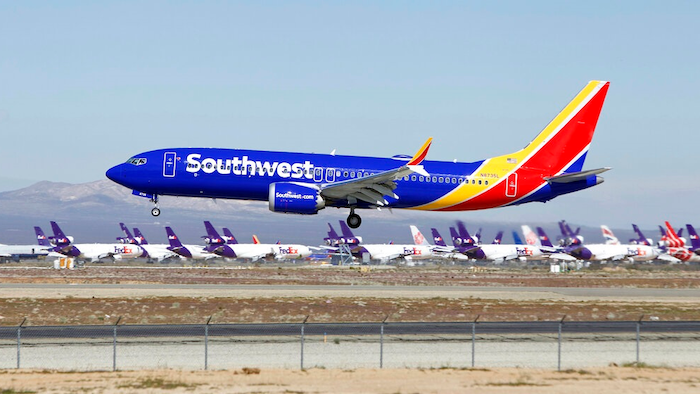 In this March 23, 2019, file photo, a Southwest Airlines Boeing 737 Max aircraft lands at the Southern California Logistics Airport in the high desert town of Victorville, Calif. The union president of Southwest Airlines pilots worries that Boeing may be rushing the 737 Max back into service, and he says Southwest should consider buying planes from another company. The union president, Jon Weaks, adds that Boeing has exhibited arrogance and greed that will haunt the company forever.
AP Photo/Matt Hartman, File

DALLAS (AP) — Southwest Airlines will share about $125 million from a Boeing settlement with its workers.

The Dallas carrier has been among the hardest hit by the grounding of Boeing's Max 737 airplanes in March after a pair of deadly crashes. Without the planes, Southwest has said that it will cancel about 175 flights each weekday. Southwest had 34 Max planes when they were grounded and had expected more to be delivered this year

Earlier this month, the airline pushed back the return date for the troubled aircraft. The planes will not be included on flight schedules until at least March 6, a month longer than previously planned, citing continued uncertainty.

The airline said Thursday that the money given to employees will be funded as part of its annual 2019 profit sharing distribution next year. Southwest workers will also find out next year more details on the percentage of money they will receive.

The settlement details with Boeing are confidential.

Southwest Airlines Co. is in ongoing talks with Boeing Co. about compensation for damages related to the Max groundings.

Progress MS-15 is carrying about three tons of fuel, water, food, medicine and other supplies.
Jul 24th, 2020
Follow Us
Most Recent