Questions persist as to whether the FAA is too cozy with Boeing. 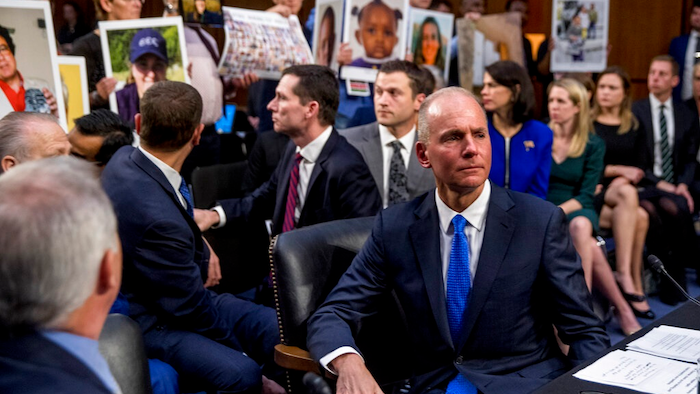 The head of the Federal Aviation Administration will face questions about whether the agency is too cozy with Boeing when he testifies this week before a congressional panel.

The chairman of the House Transportation Committee says he plans to ask FAA Administrator Stephen Dickson about Boeing's influence over the FAA's Seattle office and incidents in which FAA managers vetoed the concerns of the agency's own safety experts.

“We are having a hard time piercing the veil of how consistently and repeatedly Boeing is managing to pressure and overcome the objectives of the safety specialists,” committee Chairman Peter DeFazio, D-Ore., said Monday in an interview.

Dickson is scheduled to testify at a hearing Wednesday, just as the FAA gears up to review changes Boeing is making in its 737 Max jet. The Max remains grounded after two deadly crashes.

Investigations into the crashes in Indonesia and Ethiopia point to a flight-control system called MCAS that automatically pushed the noses of the planes down in response to faulty readings from a sensor. Boeing is making MCAS less powerful and tying it to a second sensor. It is also proposing material for training pilots about MCAS, and fixing a separate issue around flight-control computers. The company hopes airlines can resume using the Max early next year.

Relatives of passengers who died in the second crash say FAA is focusing too narrowly on Boeing's revamp of a flight-control system implicated in both accidents. They want a nose-to-tail review of every key system on the plane before the grounded planes can fly again.

“That's a tombstone mentality” to focus only on MCAS, said Nadia Milleron, whose daughter died in the March 10 crash of an Ethiopian Airlines Max. “You don't just wait until people die to address (other) systems."

Chris Moore, whose daughter died in the Ethiopian crash, sent a list of questions that he hopes lawmakers will ask Dickson, including why the FAA didn't ground the Max after the first crash, when a Lion Air Max plunged into the sea off the coast of Indonesia in October 2018.

About a dozen family members plan to attend Wednesday's hearing. They are driven by a deep distrust of Boeing, and a few have delved into the details of aircraft manufacturing.

When Boeing's chief engineer told Congress that the company did not test what would happen if a single sensor tied to MCAS failed, family members and other critics seized on the disclosure to raise questions about Boeing's analysis of other key systems on the plane.

Boeing employees conducted those assessments under a decades-old FAA policy — strengthened in 2005 — of relying on the technical knowledge of the companies that it regulates. FAA inspectors are supposed to oversee the work of those company employees, but published reports suggest that the agency knew little about MCAS when it certified the Max.

DeFazio said Monday that the FAA program of relying on aircraft company employees “obviously needs significant improvement,” but he hasn't settled on how to do that. “I'm hoping Dickson can volunteer some ideas," he said.

Dickson, a former Delta Air Lines pilot and executive, will be testifying about the Max for the first time since he became FAA administrator in August.

During previous hearings, lawmakers have accused FAA of favoring Boeing and overruling FAA experts in two other cases. One involved the placement of rudder cables on the Max that, in the view of FAA engineers, could make them vulnerable to being severed if an engine blew apart in flight.

The committee also plans to hear from several other witnesses, including Ed Pierson, a former Boeing production manager who protested a push to increase production of the Max. In an email to another Boeing executive in June 2018, which the committee made public in October, Pierson said he was hesitant to put his own family on a Boeing plane.