The rocket is 212 feet tall and more than 27 feet in diameter. 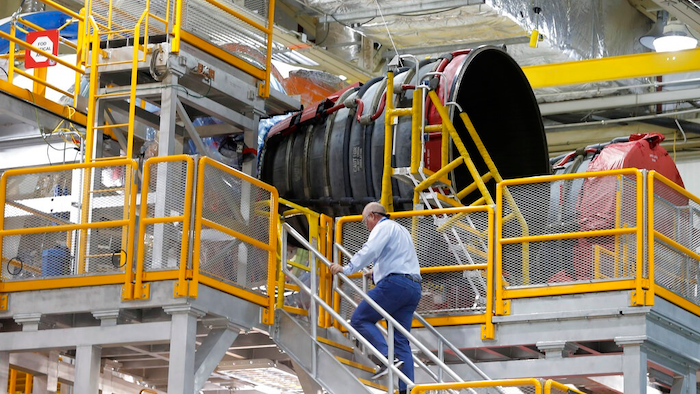 An employee walks up to two of the four rocket engines of NASA's Space Launch System (SLS) as the Artemis 1 rocket core stage is assembled at the NASA Michoud Assembly Center in New Orleans, Monday, Dec. 9, 2019.
AP Photo/Gerald Herbert

NEW ORLEANS (AP) — NASA administrator Jim Bridenstine and the media got an up-close look Monday at a huge, newly completed rocket for the program aimed at putting a man and woman on the moon as early as 2024.

Bridenstine was in New Orleans to see the first of the “core stage" rockets for NASA's Space Launch System at the Michoud Assembly Center, where it was built for NASA's Artemis program.

The rocket, 212 feet (65 meters) tall and more than 27 feet (8 meters) in diameter, is to be loaded on a barge by year's end for transport to the Stennis Space Center in neighboring coastal Mississippi.

There, Bridenstine said, it will undergo tests before being transported to Cape Canaveral, Florida. According to NASA, the first non-reusable rocket is to be launched for a test flight carrying a spacecraft without a crew, a mission known as Artemis I. A second would later send a crewed spacecraft into space. The third mission, Artemis III, would put a man and woman on the south pole of the moon, with an eye toward a continued presence that would lead eventually to a trip to Mars.

“We are making significant progress towards achieving that Artemis III mission and getting our first woman and next man to the south pole of the moon in 2024," Bridenstine said.

Among others attending the NASA event was Jasmin Moghbeli, who is set to graduate from the astronaut training program next year.

“Just seeing us go back to the moon and doing that in a sustainable way and using that as a stepping bed to move on further than we've ever been before, going to Mars, is super exciting,” Moghbeli said. “And the fact that I'm in the astronaut office now and, you know, to think of the next people to go on the moon, I will know them. And it will be such an incredible thing for girls around the country and around the world to see a woman on the moon for the first time.”

Health officials warn that it would not detect people who have COVID-19 but show no symptoms.
Jul 23rd, 2020
Follow Us
Most Recent