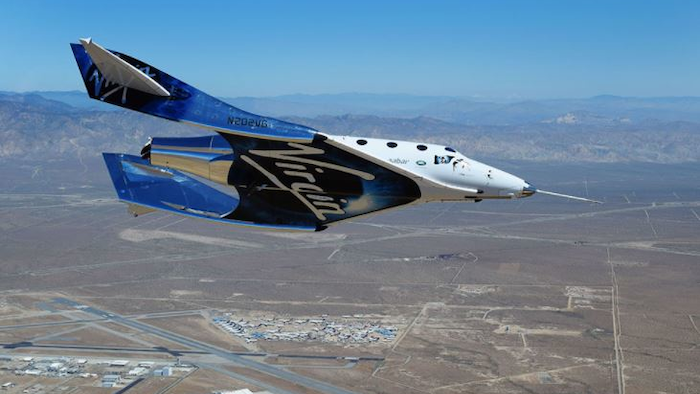 The glide flight Thursday incorporated a special ballast tank filled with water at the rear of the rocket plane to check handling qualities with more weight on board and with the center of gravity shifted to the rear.

Water was then jettisoned by pilots Dave Mackay and CJ Sturckow to check handling as the center of gravity moved forward.

The released water formed a trail across the Mojave Desert sky north of Los Angeles.

It was the ninth test flight of the twin-tailed ship, named VSS Unity, which is carried aloft by a special carrier aircraft and released.

The previous flight a month earlier tested the so-called feathering mechanism that will be used to slow the spacecraft when it re-enters the atmosphere during a suborbital flight into space.

The twin tailbooms rotate upward at an angle relative to the fuselage and create drag, then return to a normal airplane configuration so the space plane can glide to a landing.

The term "feathering" comes from an analogy to the feathers that control the orientation of a badminton shuttlecock.

Virgin Galactic said Thursday's flight was a milestone as the glide phase of testing is nearing its end.

Data from the flights will be analyzed to prepare for flights with fuel on board and then powered flights with the rocket motor ignited.

When the system is proven, Virgin Galactic plans to take passengers on suborbital jaunts into the lower reaches of space where they can briefly experience weightlessness and see the curvature of the Earth below.

VSS Unity is Virgin Galactic's second spacecraft. The first broke apart, killing one its two crewmembers, in 2014 when the co-pilot prematurely unlocked the feathering system during a powered test flight.