Photos Of The Day: Astronaut Scott Kelly Returns To Earth

Clearly animated and looking well, Kelly said he didn't feel much different than he did after his five-month station mission five years ago. 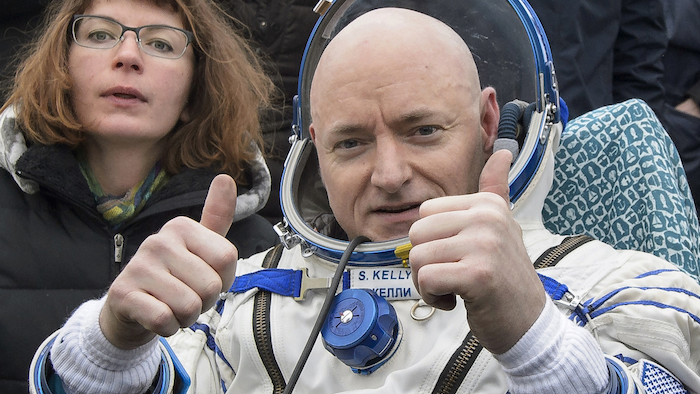 Astronaut Scott Kelly returned to Earth on Wednesday after an unprecedented year in space for NASA, landing in barren Kazakhstan with a Russian cosmonaut who shared his whole space station journey.

Their Soyuz capsule parachuted onto the central Asian steppes and ended a science-rich mission at the International Space Station that began last March and was deemed a steppingstone to Mars.

It was a triumphant homecoming for Kelly and Mikhail Kornienko after 340 days in space. Kelly pumped his fist as he emerged from the capsule, then gave a thumbs-up. He smiled and chatted with his doctors and others as photographers crushed around him in the freezing cold. 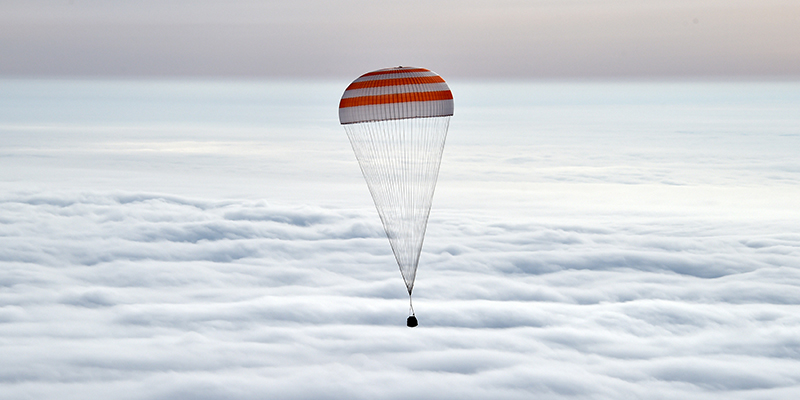 "The air feels great out here," NASA spokesman at the scene, Rob Navias, quoted Kelly as saying. "I have no idea why you guys are all bundled up."

Clearly animated and looking well, he said he didn't feel much different than he did after his five-month station mission five years ago.

Kelly and Kornienko had checked out of the space station 3½ hours earlier. In total, they traveled 144 million miles through space, circled the world 5,440 times and experienced 10,880 orbital sunrises and sunsets during the longest single spaceflight by an American.

See what happens from deorbit burn to landing for the spacecraft carrying Astronaut Scott Kelly as he returns from his #YearInSpace:

Kelly posted one last batch of sunrise photos Tuesday on Twitter, before quipping, "I gotta go!" His final tweet from orbit came several hours later: "The journey isn't over. Follow me as I rediscover # Earth!"

Piloting the Soyuz capsule home for Kelly, 52, and Kornienko, 55, was the much fresher and decade younger cosmonaut Sergey Volkov, whose space station stint lasted the typical six months.

The two yearlong spacemen faced a series of medical tests following touchdown. Before committing to even longer Mars missions, NASA wants to know the limits of the human body for a year, minus gravity.

As he relinquished command of the space station Monday, Kelly noted that he and Kornienko "have been up here for a really, really long time" and have been jokingly telling one another, "We did it!" and "We made it!"

"A year now seems longer than I thought it would be," Kelly confided a couple weeks ago.

Not quite a year — 340 days to be precise, based on the Russian launch and landing schedule. But still record-smashing for NASA.

Kelly's closest U.S. contender trails him by 125 days. Russia continues to rule, however, when it comes to long-duration spaceflight. The world record of 438 days was set by a Russian doctor during the mid-1990s.

"A really smart person said to me one time, 'Teamwork makes the dreamwork in spaceflight,' and spaceflight is the biggest team sport there is," Kelly said Monday. He acknowledged each of the 13 U.S., Russian, European and Japanese space fliers with whom he and Kornienko lived during the past year. "It's incredibly important that we all work together to make what is seemingly impossible, possible." 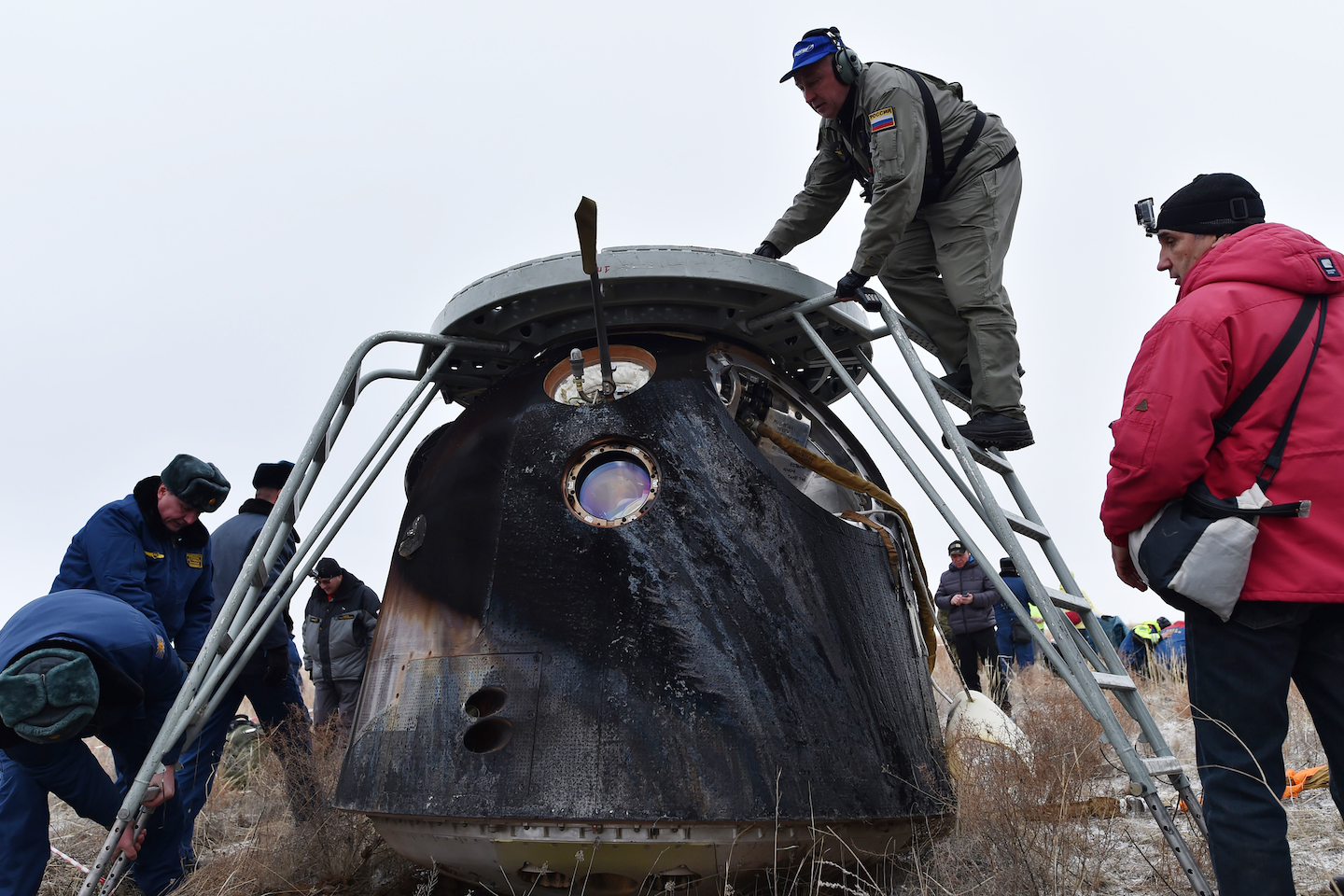 A search and rescue team works at the site of landing of the Soyuz TMA-18M space capsule carrying the International Space Station (ISS) crew of U.S. astronaut Scott Kelly and Russian cosmonauts Mikhail Kornienko and Sergey Volkov outside the town of Dzhezkazgan, Kazakhstan. (Krill Kudryavtsev/Pool Photo via AP)

For NASA, that mission possible is Mars.

Scientists are hoping for more one-year subjects as NASA gears up for human expeditions to Mars in the 2030s. Radiation will be a top challenge, along with the body and mind's durability on what will be a 2½-year journey round trip. With his one-year mission, Kelly has "helped us take one giant leap toward putting boots on Mars," NASA Administrator Charles Bolden said in a statement.

The choice of the pioneering Kelly turned out to be a bonanza. His identical twin, retired astronaut Mark Kelly, offered himself up as a medical guinea pig so researchers could study the differences between the genetic doubles, one in space and the other on the ground. They provided blood, saliva and urine samples, underwent ultrasounds and bone scans, got flu shots and more, all in the name of science.

"My brother @StationCDRKelly is back home on our planet! Talk about aliens. He's been off the planet for a year," Mark Kelly joked via Twitter.

Kelly and Kornienko were due to split up later Wednesday. Kelly heads to Houston with two flight surgeons and several other NASA reps, arriving late Wednesday night. That's where he'll be reunited with his two daughters, ages 21 and 12; his girlfriend, a NASA public affairs representative at Johnson Space Center; and his brother and his brother's wife, former Arizona congresswoman Gabrielle Giffords.

"Excited to welcome him back in Houston," Giffords tweeted.

Kornienko returns to his home in Star City, Russia, near Moscow, to his wife, daughter and toddler grandson. 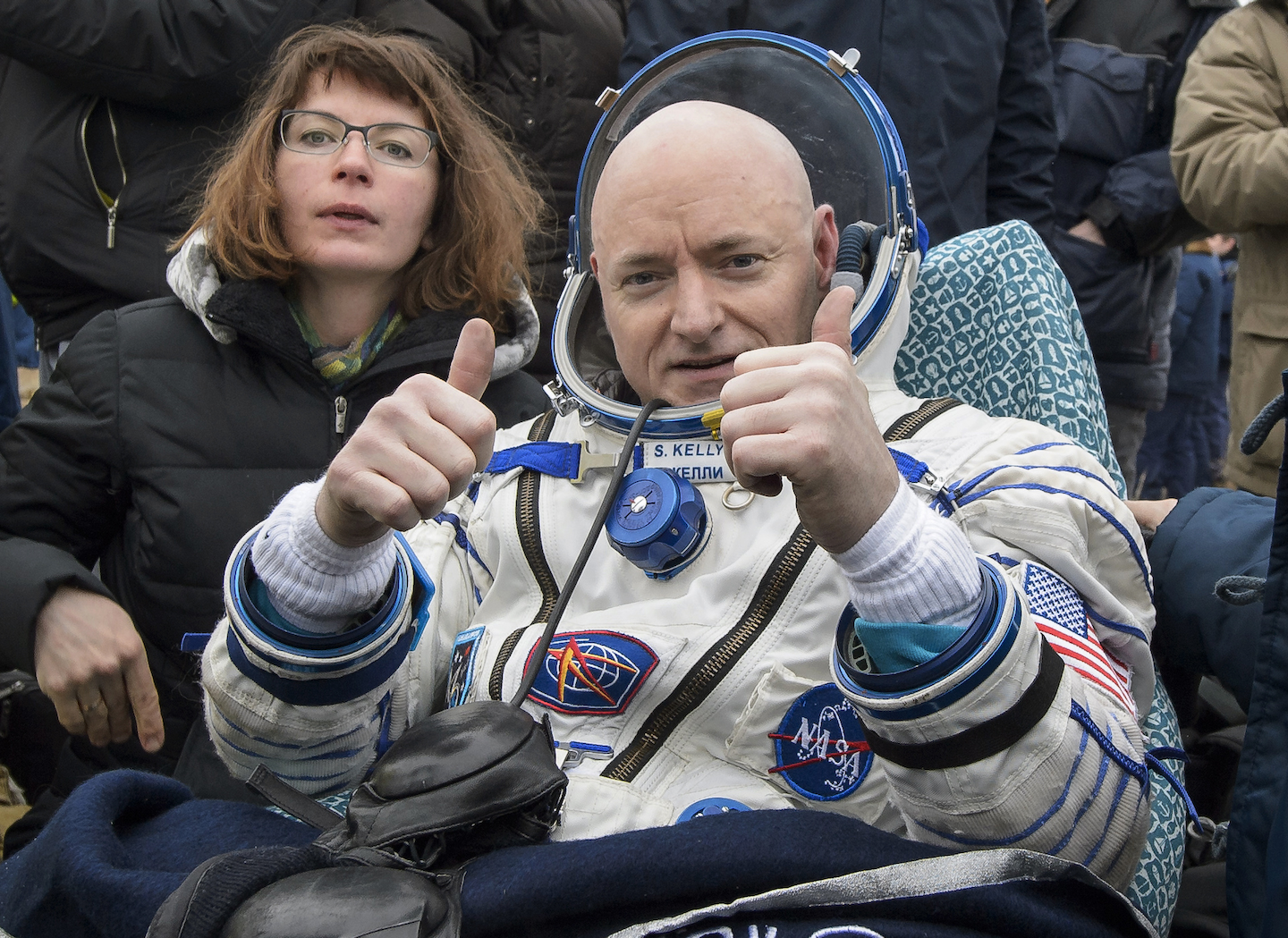 Kelly has spent more time in space, altogether, than any other American: 520 days over the course of four missions. Realizing this is likely his last journey, it was "a little bittersweet" saying goodbye to his orbiting home. He'll have plenty of pictures, at least, for the scrapbook — he posted 1,000 dramatic, color-drenched pictures of Earth on his Twitter and Instagram accounts.

"What a ride he took us on!" fellow astronaut Reid Wiseman said in a tweet from Houston.

"Those of us who dream of sending astronauts to deep space thank Scott Kelly for his sacrifice," said Jim Green, director of planetary science for NASA, "and are thrilled to welcome him home."

Elon Musk tweeted "at least the crater is in the right place!"
Mar 30th, 2021
Follow Us
Most Recent