Commercial jet manufacturing is playing a larger and larger role at Boeing. 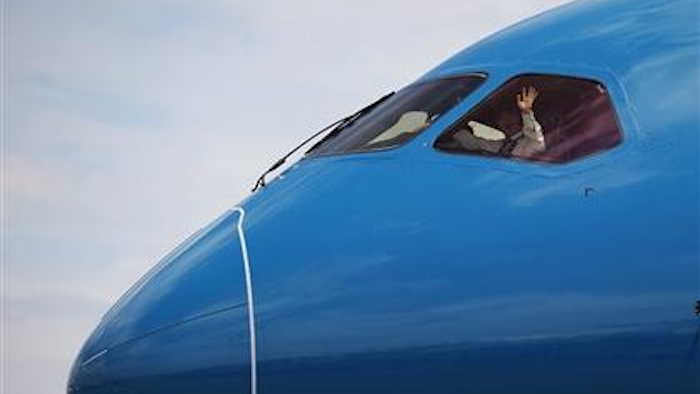 Faster production of commercial jets continues to drive profits at the Boeing Co., which saw earnings jump 25 percent in the third quarter. It also raised its earnings outlook for the year.

The Chicago-based company on Wednesday posted a $1.7 billion net profit, up from $1.36 billion during the same period last year.

Boeing said it earned $2.47 per share. Earnings excluding certain pension expenses? came to $2.52 per share. The results topped Wall Street expectations. The average estimate of nine analysts surveyed by Zacks Investment Research was for earnings of $2.22 per share.

Commercial jet manufacturing is playing a larger and larger role at Boeing, also known for its military and space programs. Payments from the delivery of new jets to airlines accounted for 68 percent of Boeing's $25.85 billion in revenue. That also beat Wall Street's estimates; analysts surveyed by Zacks expected $24.74 billion.

In July, August and September, the aerospace company delivered 199 commercial jets, up from 186 during the same quarter last year. And more of those jets are expensive wide-bodies, such as the 787 Dreamliner. During this quarter last year, 31 Dreamliners were delivered to airlines; this year Boeing delivered 37.

The challenge now for Boeing is to bring down the production cost of the long-delayed Dreamliner so it can bring in more cash and maybe, someday, breakeven on the plane whose development costs ran over budget.

The company raised its outlook for the year by 5 cents a share. Boeing now expects full year earnings to be between $7.65 and $7.85 a share. Boeing still has a record backlog of new jet orders: nearly 5,700 valued at $426 billion. However, lower fuel prices, a slowing global economy and the possible end of cheap interest rates has led some analysts to question how much longer this new plane buying spree will continue and if some of those orders won't eventually be delivered.

Just last week, Delta Air Lines CEO Richard Anderson said that a large number of wide-body jets coming off lease in the near future is creating an "aircraft bubble." He predicted that airlines like his would be able to buy up these used jets cheaply, which would drive down demand — and prices — for the newer and more fuel-efficient models that Boeing and European rival Airbus are selling.

Boeing Co. shares were up $1.14 to $140.02 in late morning trading Wednesday. Its shares have risen about 6 percent so far this year.