Malaysia's defense minister on Monday defended his military's failure to scramble a fighter jet to follow a Malaysian airliner when it veered off course and vanished two months ago, saying it wasn't seen as a hostile object. 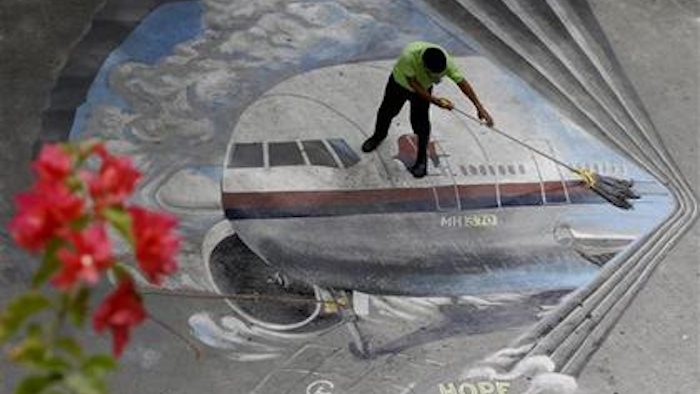 CANBERRA, Australia (AP) -- Malaysia's defense minister on Monday defended his military's failure to scramble a fighter jet to follow a Malaysian airliner when it veered off course and vanished two months ago, saying it wasn't seen as a hostile object.

Malaysia Airlines Flight 370 became invisible to civilian radar when its transponder stopped transmitting during a flight from Kuala Lumpur to Beijing on March 8. But the plane was tracked by Malaysian military radar after it turned in a westerly direction across Peninsular Malaysia.

In response to criticism that fighter jets should have been scrambled to investigate the then-unidentified flight through Malaysian air space, Defense Minister Hishammuddin Hussein told Australian Broadcasting Corp.'s "Four Corners" program broadcast Monday that the plane was deemed commercial and not hostile.

"If you're not going to shoot it down, what's the point of sending it (a fighter) up?" Hishammuddin asked.

He said had the Boeing 777 been shot down with 239 passengers and crew on board, "I'd be in a worse position, probably."

Delays in confirming the flight's change of direction led to several days of wasted searching for wreckage in the South China Sea along the airliner's original course, before an analysis of satellite data identified the southern Indian Ocean as a more likely crash site.

Hishammudin previously defended the military's inaction in pursuing the plane for identification after a preliminary report on its disappearance was released early this month.

On that occasion, he said he was informed of the military radar detection two hours later and relayed it to Malaysian Prime Minister Najib Razak, who immediately ordered a search in the Strait of Malacca.

Also on "Four Corners," Asuad Khan, the brother-in-law of missing pilot Zaharie Ahmad Shah, rejected speculation that Zaharie was the perpetrator of a mass murder-suicide.

Asuad said media reports that his sister Faizah and her children had left Zaharie hours before the flight were false.

Separately, officials said a Chinese navy survey ship will start mapping the seabed off the west Australian coast this week as part of a new phase of the search.

Chinese, Australian and Malaysian authorities met at the west coast port city of Fremantle over the weekend and agreed that the Chinese ship Zhu Kezhen will conduct a bathymetric survey of the Indian Ocean floor as directed by Australian air crash investigators, Australia's Joint Agency Coordination Center said in a statement.

The Canberra-based center said the ship was scheduled to sail for the survey area on Wednesday, weather permitting.

After an initial air and seabed search failed to find any trace of the plane, authorities this month announced a new phase of the search would be conducted over a vastly expanded area of seabed measuring 60,000 square kilometers (23,000 square miles). The new phase also involves mapping the seabed, where depths and topography are often unknown.

Negotiations are underway to contract powerful sonar equipment to scour the seabed for wreckage that could be in water more than 7 kilometers (23,000 feet) deep.

The original search of less than 400 square kilometers (155 square miles) of ocean floor where sounds consistent with aircraft black boxes were thought to have emanated was conducted by an unmanned U.S. Navy sub, the Bluefin 21, near its 4.5-kilometer (2.8-mile) depth limit.

The Bluefin 21 continued searching an ever widening area until a communications problem was discovered last week involving the transponders on the sub and the Australian navy ship that tows it, Ocean Shield.

The center said the Ocean Shield arrived on Sunday at the Australian west coast port of Geraldton, where preparations are underway to install spare transponder parts on both the ship and sub.