UK Company To Track Planes After Loss Of Flight 370

Inmarsat, the global mobile satellite provider, says it will offer free basic tracking services for planes flying over oceans to prevent another incident such as the loss of Malaysia Airlines Flight 370. 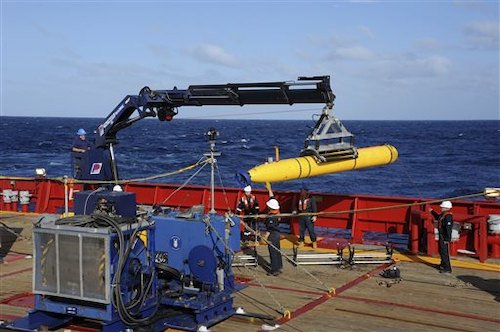 LONDON (AP) -- Inmarsat Plc, a provider of global mobile satellite communications services, said it will offer free basic tracking services for planes flying over oceans in the hope of preventing another incident such as the loss of Malaysia Airlines Flight 370.

The British company said Monday that the service is being offered to all 11,000 commercial passenger aircraft already equipped with an Inmarsat satellite connection — most of the world's long-haul commercial fleet.

"This offer responsibly, quickly and at little or no cost to the industry, addresses in part the problem brought to light by the recent tragic events around MH370," said Inmarsat CEO Rupert Pearce.

The Boeing 777 with 239 people on board was en route to Beijing from Kuala Lumpur on March 8 when it disappeared. The plane automatically sent signals to a satellite belonging to Inmarsat after the plane's transponder and its communication systems had shut down — but researchers were unable to find the plane before the batteries in the black box flight recorder shut down.

Malaysia's government said the plane's last position was in the middle of the Indian Ocean, west of Perth, and that the flight ended there. It has not been found.

Inmarsat, which made its offer ahead of a conference in Canada on aircraft tracking, said it anticipated the adoption of further safety measures following the loss of MH370.

The company said it would also offer both an enhanced position reporting facility and a 'black box in the cloud' service that would stream historic and real-time flight data recorder and cockpit voice recorder information when a plane deviates from its course. These would not be free.

Inmarsat PLC started out in 1979 as an intergovernmental organization that helped track ships at sea, but became a private company in 1999.

Its customers now include airlines, broadcast media, oil and gas companies and aid agencies who use hand-held satellite phones, laptop size Internet devices and antennas linked to the company's 10 satellites to communicate.