Colin Pillinger, an ebullient space scientist who captured the popular imagination with his failed attempt to land a British probe on Mars, has died. He was 70. 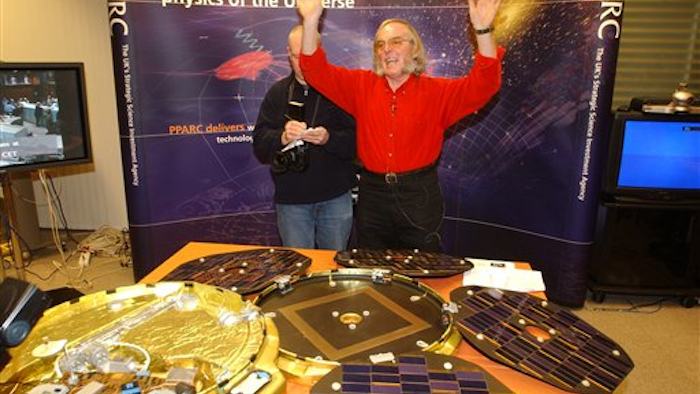 LONDON (AP) -- Colin Pillinger, an ebullient space scientist who captured the popular imagination with his failed attempt to land a British probe on Mars, has died. He was 70.

Pillinger's family said Thursday that he died at Addenbrooke's Hospital in Cambridge after suffering a brain hemorrhage while sitting in his garden.

Pillinger, a professor of interplanetary science at the Open University, was the driving force behind the largely privately funded Beagle 2 space mission.

The tiny craft — named for the ship that took naturalist Charles Darwin on his 19th-century voyage of discovery — was supposed to land on Mars on Christmas Day in 2003 and search for signs of life. But contact with the probe was lost soon after it separated from its European Space Agency Mars Express mother ship on Dec. 19. An investigation found that it may have burned up in the planet's atmosphere.

The loss of the probe, which cost the government more than $40 million and the private sector another $80 million, prompted questions in Britain about Europe's ability to participate in the race to Mars.

Pillinger, who had become famous with his bushy sideburns and enthusiastic delivery of frequent media updates on the mission, was bitterly disappointed but held out hope of a second attempt.

"We have unfinished business on Mars," he said in 2005. "The science is more important now than it ever was."

A new European Mars mission, ExoMars, is due to launch in 2018.

Britain's astronomer royal, Martin Rees, said Pillinger was "an archetype eccentric professor" who had done a great deal to communicate and popularize science.

Rees said the Beagle mission "was a failure, but a heroic failure. Several far more expensive and elaborate Mars missions failed, and he deserves huge admiration for the way he cobbled together the funds for this project against all the odds, inspiring interest and enthusiasm along the way."

Pillinger gained a PhD from Swansea University in 1968 and began his career at NASA, analyzing samples of moon rock. He worked at Cambridge and the Open University, a pioneer of distance learning.

PIllinger, who was diagnosed with multiple sclerosis in 2005, is survived by his wife Judith, daughter Shusanah and son Nicolas.