Many of the relatives maintain they are not being told the whole truth — a not-uncommon mindset among Chinese accustomed to dealing with authorities in their own opaque, single-party communist state. 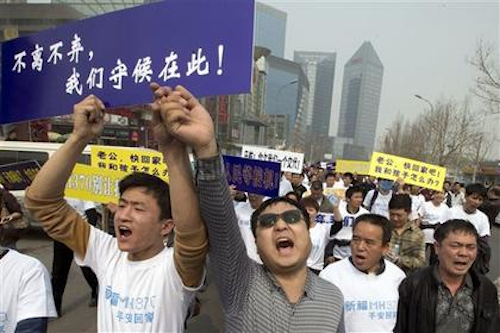 BEIJING (AP) -- Furious that Malaysia has declared their loved ones lost in a plane crash without physical evidence, Chinese relatives of the missing marched Tuesday to the Malaysian Embassy, where they threw plastic water bottles, tried to rush the gate and chanted, "Liars!"

The Chinese government, meanwhile, demanded that Malaysia turn over the satellite data it used to conclude that Malaysia Airlines Flight 370 went down in the southern Indian Ocean with no survivors after turning back from its flight path to Beijing on March 8.

Among the flight's 239 passengers, 153 were Chinese nationals, making the incident a highly emotional one for Beijing, and the government's demand reflected the desire among many Chinese relatives of passengers for more conclusive information on the plane's fate.

Nearly 100 relatives and their supporters marched to the embassy in the late morning, wearing white T-shirts that read "Let's pray for MH370" as they held banners and chanted for about three hours.

"Tell the truth! Return our relatives!" they shouted. There was a heavy police presence at the embassy, and a brief scuffle when some relatives tried to get past police to approach journalists, but no effort was made to break up the demonstration. The group presented a letter of protest to the embassy before getting into several buses and departing.

Many of the relatives maintain they are not being told the whole truth — a not-uncommon mindset among Chinese accustomed to dealing with authorities in their own opaque, single-party communist state. Though some have expressed resignation that their relatives probably are dead, they have accused Malaysian authorities of foot-dragging and withholding information early in the search, when there might have been some chance to save the plane.

"I want the truth, and I believe they have been hiding some information from us," said Wang Zhen, who was not part of Tuesday's demonstration but whose parents were aboard the missing plane. "It remains an enigma as to what happened after the plane turned around. What happened when the plane continued to fly?

"I am still hoping for my parents' return, even though I understand the probability is very, very low," Wang said in a telephone interview.

Chinese President Xi Jinping is sending a vice foreign minister to Kuala Lumpur as his special envoy to deal with the matter of the missing plane, the official Xinhua News Agency reported Tuesday.

"We demand the Malaysian side to make clear the specific basis on which they come to this judgment," Xie was quoted as telling Datuk Iskandar Bin Sarudin.

There was no immediate response from the Malaysian side.

The flight vanished less than an hour into an overnight flight March 8 from Kuala Lumpur to Beijing.

In Monday night's announcement, Malaysian Prime Minister Najib Razak said that an unparalleled study of the jet's last-known signals to a satellite showed that the missing plane veered "to a remote location, far from any possible landing sites."

The conclusions were based on a more thorough analysis of the brief signals the plane sent every hour to a satellite belonging to Inmarsat, a British company, even after other communication systems on the jetliner shut down for unknown reasons.

Malaysia Airlines on Tuesday said it was doing everything possible to help the families, and defended itself against criticism over how it informed them about the government's conclusion that no one aboard the aircraft is still alive. Some relatives were informed by text message.

"Our sole and only motivation last night was to ensure that in the incredibly short amount of time available to us, the families heard the tragic news before the world did," CEO Ahmad Jauhari Yahya said.

"We know that while there have been an increasing number of apparent leads, definitive identification of any piece of debris is still missing. It is impossible to predict how long this will take," he said. "But after 17 days, the announcement made last night and shared with the families is the reality which we must now accept."

Monday's announcement sparked mournful, angry and chaotic scenes at the Beijing hotel where many relatives had gathered. Around 2:00 a.m. Tuesday (1800 GMT Monday), a group of family members read out a statement accusing Malaysia Airlines and the Malaysian government and military of procrastination and cover-up.

"Such despicable acts have not only fooled but devastated — both mentally and physically — the family members ... but also misled and delayed rescue operations, wasting huge amounts of human power and resources and forgoing the most critical rescue opportunities," the statement said.

Tuesday's demonstration at the embassy was unusual for China, where authorities typically clamp down firmly on spontaneous public gatherings that have no prior permission, especially those with any potential to escalate into anti-government protests.

Calls to the news office for the Beijing Public Security Bureau were unanswered. The police also did not respond to a faxed question about whether family members had obtained police permission.

The search for Flight 370 initially centered on the Malay Peninsula, until authorities there announced they had satellite data showing the plane flew on for hours and went much farther afield, going either north toward Central Asia or south to the southern reaches of the Indian Ocean.

Nan Jinyan, sister-in-law of Flight 370 passenger Yan Ling, said she suspects Malaysian authorities knew for a long time that the plane went down in the Indian Ocean.

"I feel like they are toying with human lives," Nan said. "What else can be more important than human lives?"

Of her brother-in-law, Nan said, "I don't think there's any shred of hope for him to return.

"We are exhausted after all those days, and I think we are all at loss as to what to do. We have never been through anything like this, and we have no direction."