About two weeks after winning approval as one of only a handful of federal test sites, researchers from Texas A&M University-Corpus Christi are putting their unmanned remote-controlled aircraft, commonly known as drones, in the air this week for another round of test flights. 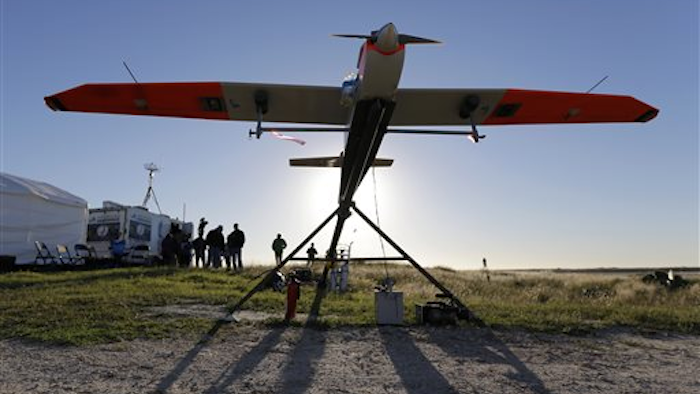 SARITA, Texas (AP) -- The next big thing in American aviation sounds and looks like an oversized leaf blower with wings and a tail, has duct tape keeping some of its pieces in place and must be carried to a catapult that sends it into flight.

About two weeks after winning approval as one of only a handful of federal test sites, researchers from Texas A&M University-Corpus Christi are putting their unmanned remote-controlled aircraft, commonly known as drones, in the air this week for another round of test flights.

An unmanned aerial vehicle known as an RS-16 took off Wednesday on the first of several flights from a gas-propelled catapult at a Kenedy County ranch in far South Texas and headed up to nearly 3,000 feet over the Gulf Coast.

About 90 minutes later, it returned safely, skidding to a stop on its belly — it doesn't have landing wheels — on a sandy dry lake bed about 8 miles inland.

Texas is among six states designated by the Federal Aviation Administration to develop test sites for drones, and the university is supervising 11 sites throughout the state. The testing is seen as a critical step in a blossoming industry that could be worth billions of dollars and result in thousands of unmanned working in commercial and research applications.

"We're still in a kind of developmental stage," David Bridges, director of the university's unmanned aircraft systems project said. "We're maturing the operation, taking data, getting to our faculty. They're looking at it, see if they can use it or how we might need to change to get data.

"We're basically using this area as our laboratory."

The military and some law enforcement agencies already employ the devices, but the FAA doesn't currently allow commercial use of drones. It is working, however, to develop guidelines for use by the end of 2015, although officials concede the project may take longer. The agency projects some 7,500 commercial drones could be aloft within five years of getting widespread access to the skies above America.

Texas A&M-Corpus Christi has been researching how to use the drones to detect oil spills and wildfire hotspots, monitor hurricanes and count cattle for ranchers.

The plane itself weighs about 85 pounds at takeoff, can reach a speed of 65 knots, has a wingspan of just under 13 feet and can carry a payload of 25 pounds. It's made of carbon fiber material. The RS in its title stands for Recon System.

Rather than a roar, it takes off with a clang, a metal catapult firing it into the sky. The small engine turning a single propeller sounds like a home garden implement because it is: a Honda engine from a garden tiller.

"It's a small one, but it's rugged and has high torque," Bridges explained.

Gabe Ladd, one of about a half-dozen technicians inside a truck trailer that serves as the onsite control center for this week's tests, examined aerial photos of sea grass captured in visible photos, thermal images and ultraviolet infrared images. The results could allow scientists to determine the health of the grass environment "from year to year, season to season," he said.

In 2012, Congress passed legislation directing the FAA to integrate unmanned aerial systems into the nation's airspace by 2015. The test sites, like the one in South Texas, are the FAA's way of gathering data to deal with privacy and safety issues, like how to keep the drones from flying into other objects.

Part of the research now involves communication issues. The aircraft, for instance, has been losing radio contact in some spots; it's programmed to return to its launch area if it doesn't receive a command within a couple of minutes. According to federal rules, the drone must be visible from the ground or have a chase plane trailing it.

"The unmanned aircraft doesn't have see-and-avoid capability," Bridges said. "Specifically, what the FAA wants out of these test sites is research into technology and procedures so unmanned aircraft can be integrated into manned airspace, the national airspace, so they can operate safely side by side.

"That's the whole point of all this and a lot of research at the test sites will be specifically that."