At 300 feet long, the HAV 304 “Airlander” is the biggest aircraft currently in production — 60 feet longer than a Boeing 747 — and it’s being made by England-based Hybrid Air Vehicles for a cool $100 million. 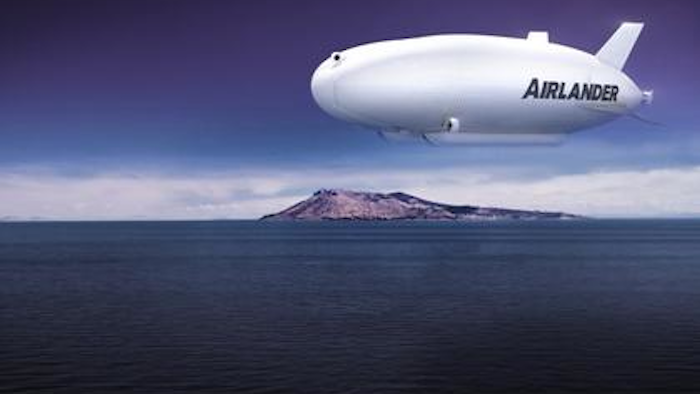 At 300 feet long, the HAV 304 “Airlander” is the biggest aircraft currently in production — 60 feet longer than a Boeing 747 — and it’s being made by England-based Hybrid Air Vehicles for a cool $100 million. The company thinks it could be used in to deliver cargo and heavy equipment to remote areas — think off-shore oil rigs or mining facilities out in the boonies — or for rescue missions on the ocean.

Wired is reporting that the Airlander is no Hindenburg. The hull acts as a hydrofoil and produces 40 percent of the craft’s lift, as an airplane’s wing would. In conjunction with helium bladders, the craft is capable of “zero-energy” lift during flight, which increases its range and efficiency. Four V8 diesel engines propel it forward, and it’s capable of flying for 21 days straight at a top speed of 100 miles per hour. Not bad for a craft that weighs 38 tons.

When it comes to the technology behind the Airlander, Bruce Dickinson, who is probably best-known for his contributions to Iron Maiden, said, “The airship has always been with us, it’s just been waiting for the technology to catch up.” He’s contributed $450,000 of his own cash and his name to help promote the company’s growth.

Usual skepticism about helium crafts aside, the video below does mention a number of technologies and capabilities that would make the Airlander quite an advantage over other aircraft, or even boats for sea-based commercial work, or big-rigs on land. When it comes to adverse weather, the Airlander can simply float away and hover at a distance, waiting for the sun to shine again at its destination. It’s also capable of landing on just about any relatively flat surface, be that sand or dirt or paved road.

One could actually imagine seeing one of these crafts being useful in finding the missing Malaysian Airlines jet, for example. When the wreckage is found, the Airlander could be used to haul cargo to the area and then linger, as would a boat, to supply equipment or goods for those working on the salvage mission.

The company hopes to produce about 10 Airlanders per year for the next four years, and is saying that right now, global demand tops out at roughly 600 to 1,000 airships. That means at least six decades of business if all goes to plan — unless, of course, demand picks up. The company is currently holding a contest for two tickets to fly alongside Dickinson and “a host of celebrities” on the “maiden” flight, which is scheduled for 2016. No word on private performances onboard the Airlander.