The international crises over events in Crimea could affect Bombardier's efforts to finalize negotiations for a joint venture to build Q-400 turboprops in Russia, the manufacturer said Thursday. 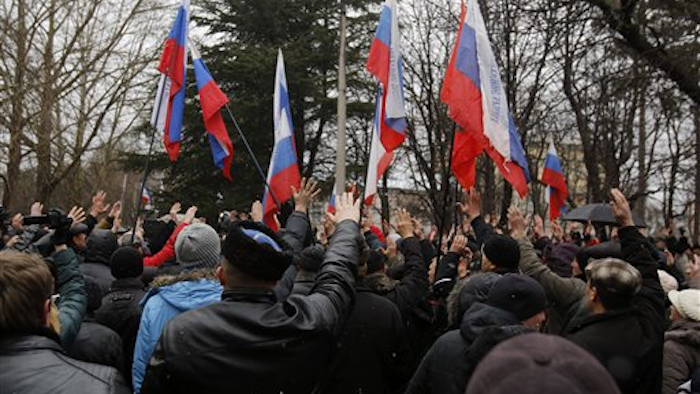 The international crises over events in Crimea could affect Bombardier's efforts to finalize negotiations for a joint venture to build Q-400 turboprops in Russia, the manufacturer said Thursday.

"With the Ukraine and everything that's happening there, it's softened up a little bit the discussions but our partner is still very eager to make that happen," aerospace president Guy Hachey told an investor conference in New York.

Hachey didn't provide any details about the potential impact the crisis might have on what he described as a "big opportunity" for the aircraft.

Russia is being targeted by western countries for its annexation of the Crimean peninsula.

Obama also signed an executive order that would allow the U.S. to penalize key sectors of the Russian economy, including its huge energy business, if Russian forces move into other areas of Ukraine.

The dispute with Russia is expected to dominate a meeting next week of G7 leaders, which includes the U.S., Britain, France, Germany, Italy, Japan and Canada.

Bombardier (TSX:BBD.B) said in January that it was close to finalizing an agreement to establish a joint venture with Rostec, a Russian state corporation, that could lead to some 100 turboprops, valued at US$3.4 billion at list prices, being built for the Russian market.

Hachey told analysts that its efforts to sell the plane in emerging markets is gaining traction in part due to the introduction of an 86-seat version that will make it more financially attractive for customers and challenge main rival ATR.

"I'm more bullish on the Q400 than I have been in the last couple of years," he told analysts.

Meanwhile, Hachey said flight testing of its new commercial CSeries aircraft will pick up in the coming months but is already providing proof of the cost savings it has promised customers to attract more than 200 firm orders.

"Obviously, we still have a lot more testing to go, we have a lot more hours to fly, but every indication right now is what we have modelled is actually happening in flight testing."

The aircraft's entry into service has been delayed until the second half of 2015.

It is one of several development programs underway. Bombardier is also developing new ultra long-range Global 7000/8000 business jets, coming out with a refreshed Challenger 350 and preparing to introduce an all-composite Learjet 85.

Bombardier CEO Pierre Beaudoin said the company has delayed the first flight of its newest Learjet, which was scheduled for Thursday, due to adverse weather.

However, the plane will have its first test flight "imminently," said Beaudoin, who added that is upbeat about the company's future.

"We've invested a lot in growth in new products in the last few years and, as the products enter into service, we're now ready to start seeing the results of all these investments," he said.

The Montreal-based transportation company expects its revenues will grow to more than US$30 billion in five years from US$18.2 billion in 2013 as its pre-tax profit EBIT doubles.

For 2016, Beaudoin said revenue should increase to between US$23 billion and US$25 billion.

Walter Spracklin of RBC Capital Markets said that's ahead of his forecast of US$22 billion, while the 2014 EBITDA guidance of US$1.5 billion was US$200 million more than he has predicted.

Bombardier expects to generate more free cash this year and will have enough liquidity to fund new aerospace programs while paying $1.8 billion of debt set to mature in 2016.

"We believe that the tone and new data points are neutral to a modest positive to our current positive thesis on the Bombardier shares," he wrote in a report Thursday.

New business aircraft are expected to add up to US$3.5 billion in additional revenue, while the CSeries should deliver US$5 billion to US$8 billion in revenue depending on if it produces 120 or 150 aircraft per year.

Beaudoin said he also anticipates the railway division revenues to grow from increased orders in high-margin rolling stock and system/signalling contracts, which together account for 39 per cent of Bombardier's revenues.

The company also expects services work will contribute one quarter of Bombardier's revenues in five years, up from 19 per cent last year.

Beaudoin said that's "a big challenge" given the anticipated growth in overall revenues but can be achieved by acquiring a services business.

Lutz Bertling, the new head of the railway division, said the company is addressing past problems while cutting costs to fund research and development.

He said that will give it a two-year innovation advantage as its two primary rivals — Alstom and Siemens — are diverted by internal problems.

On the Toronto Stock Exchange, Bombardier's shares closed at C$4.15, up six cents in Thursday trading.