U.S. Lags Behind As Commercial Drones Take Off Globally

The FAA bars commercial use of drones no matter how seemingly benign. The lone exception is an oil company that has been granted permission to fly drones over the Arctic Ocean, and it took an act of Congress to win that concession. 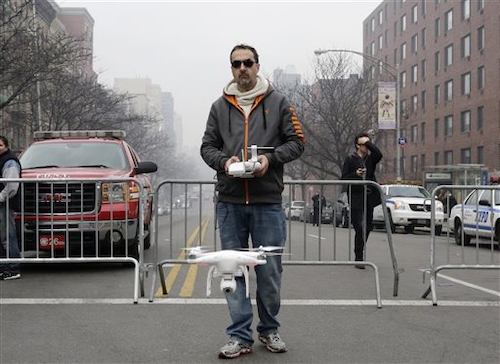 WASHINGTON (AP) — A small, four-rotor drone hovered over Washington Nationals players for a few days during spring training in Florida last month, taking publicity photos impossible for a human photographer to capture. But no one got the Federal Aviation Administration's permission first.

"No, we didn't get it cleared, but we don't get our pop flies cleared either and those go higher than this thing did," a team official said when contacted by The Associated Press. The drone flights ceased the next day. The official wasn't authorized to speak publicly and asked not to be named.

The agency bars commercial use of drones no matter how seemingly benign. The lone exception is an oil company that has been granted permission to fly drones over the Arctic Ocean, and it took an act of Congress to win that concession.

FAA officials say rules to address the special safety challenges associated with unmanned aircraft need to be in place before they can share the sky with manned aircraft. The agency has worked on those regulations for the past decade and is still months and possibly years away from issuing final rules for small drones, which are defined as those weighing less than 55 pounds. Rules for larger drones are even further off.

But tempting technology and an eager marketplace are outrunning the aviation agency's best intentions. Photographers, real estate agents, moviemakers and others are hurrying to embrace the technology. Drones have been used to photograph the two apartment buildings that collapsed in New York City this past week and a car crash in Connecticut. The AP, in fact, is one of several news organizations studying the possible use of drones.

Unless FAA officials receive a complaint or chance upon a news story that mentions drone flights, they have little ability to find out about violations. The ban was further undercut this month when a federal judge dismissed the only fine the FAA has imposed on a commercial drone operator. The judge said the agency can't enforce regulations that don't exist.

The FAA, which contends it controls access to the national air space, has appealed.

The use of commercial drones, most of them small, is starting to spread to countries where authorities have decided the aircraft presents little threat if operators follow a few safety rules.

The drone industry and some members of Congress are worried the United States will be one of the last countries, rather than one of the first, to gain the economic benefits of the technology.

"We don't have the luxury of waiting another 20 years," said Paul McDuffee, vice president of drone-maker Insitu of Bingen, Wash., a subsidiary of Boeing. "This industry is exploding. It's getting to the point where it may end up happening with or without the FAA's blessing."

In Japan, the Yamaha Motor Company's RMAX helicopter drones have been spraying crops for 20 years. The radio-controlled drones weighing 140 pounds are cheaper than hiring a plane and are able to more precisely apply fertilizers and pesticides. They fly closer to the ground and their backwash enables the spray to reach the underside of leaves.

The helicopters went into use five years ago in South Korea and last year in Australia.

Television networks use drones to cover cricket matches in Australia. Zookal, a Sydney company that rents textbooks to college students, plans to begin delivering books via drones later this year. The United Arab Emirates has a project underway to see whether government documents like driver's licenses, identity cards and permits can be delivered using small drones.

In the United Kingdom, energy companies use drones to check the undersides of oil platforms for corrosion and repairs, and real estate agents use them to shoot videos of pricey properties. In a publicity stunt last June, a Domino's Pizza franchise in the U.K. posted a YouTube video of a "DomiCopter" drone flying over fields, trees and homes to deliver two pizzas.

But when Lakemaid Beer tried to use a drone to deliver six-packs to ice fishermen on a frozen lake in Minnesota, the FAA grounded the brewskis.

Andreas Raptopoulous, CEO of Matternet in Menlo Park, Calif., predicts that in the near term, there will be more extensive use of drones in impoverished countries than in wealthier nations such as the U.S.

He sees a market for drones to deliver medicines and other critical, small packaged goods to the 1 billion people around the globe who don't have access to roads year-round.

Later this year, Matternet plans to start selling to government and aid organizations a package that includes a drone and two landing pads. On the return trip, the drones can carry blood samples bound for labs and other packages.

Germany's express delivery company Deutsche Post DHL is testing a "Paketkopter" drone that could be used to deliver small, urgently needed goods in hard-to-reach places. Facebook is in talks to buy Titan Aerospace, a maker of solar-powered drone-like satellites, to step up its efforts to provide Internet access to remote parts of the world.

There is also a strong business case for urban drones that can replace truck deliveries of single packages. "If you look at the economic footprint and CO2 emissions," Raptopoulous said, the drone "beats the truck hands down."

Worldwide sales of military and civilian drones will reach an estimated $89 billion over the next decade, according to the Teal Group, an aerospace research company in Fairfax, Va. The FAA estimates as many as 7,500 small commercial drones will be in use within five years once the necessary regulations are in place.

Jim Williams, head of the FAA's drone office, said writing rules for the U.S. is more complex than other nations. The U.S. has far more air traffic than anywhere else and a greater variety of aircraft, from hot air balloons and old-fashioned barnstormers to the most sophisticated airliners and military and business jets. At low altitudes, the concern is a small drone could collide with a helicopter or small plane flown by a recreational pilot.

"It's a different culture in the U.S. and Canada," Williams said in an interview. "People believe they have the right to just jump in their airplane and fly just like they do their car. ... We can't set up a system that puts any of those folks at risk."

Yet the FAA permits hobbyists to fly model aircraft that have so improved in technology that they're little different from small drones. The FAA has issued voluntary guidelines for hobbyists, including staying away from airports, flying no higher than 400 feet and staying within the line of sight of the operator.

"You could go off to the hobby shop, buy a little remote control helicopter and fly it to your heart's content," McDuffee said. "But if you hung a digital camera on that, took pictures of your neighbor's roof and sold those pictures to him or her, now you are in business and you're flying" an unmanned aircraft system.

Sean Cassidy, senior vice president at the Air Line Pilots Association, said he worries that commercial drone users will be less willing than hobbyists to abide by restrictions because of economic pressures.

Drones are "becoming so prevalent and affordable that something has to be done to make sure they're not being used in a reckless manner," he, said. "Even a fairly small (drone), if the person flying this thing is unaware of their surroundings ... there could be very dire consequences."