How Can A Jet Disappear?

In an age when people assume that any bit of information is just a click away, the thought that a jetliner could simply disappear over the ocean for more than two days is staggering. 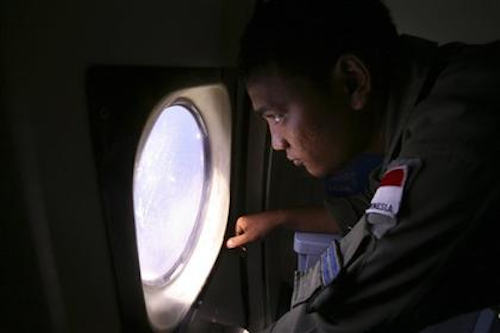 KUALA LUMPUR, Malaysia (AP) -- In an age when people assume that any bit of information is just a click away, the thought that a jetliner could simply disappear over the ocean for more than two days is staggering. But Malaysia Airlines Flight MH370 is hardly the first reminder of how big the seas are, and of how agonizing it can be to try to find something lost in them.

It took two years to find the main wreckage of an Air France jet that plunged into the Atlantic Ocean in 2009. Closer to the area between Malaysia and Vietnam where Saturday's flight vanished, it took a week for debris from an Indonesian jet to be spotted in 2007. Today, the mostly intact fuselage still sits on the bottom of the ocean.

"The world is a big place," said Michael Smart, professor of aerospace engineering at the University of Queensland in Australia. "If it happens to come down in the middle of the ocean and it's not near a shipping lane or something, who knows how long it could take them to find?"

Amid the confusion, officials involved in the search say the Malaysian jet may have made a U-turn, adding one more level of uncertainty to the effort to find it. They even suggest that the plane could be hundreds of kilometers from where it was last detected.

Aviation experts say the plane will be found — eventually. Since the start of the jet age in 1958, only a handful of jets have gone missing and not been found.

"I'm absolutely confident that we will find this airplane," Capt. John M. Cox, who spent 25 years flying for US Airways and is now CEO of Safety Operating Systems, said Monday. The modern pace of communications, where GPS features in our cars and smartphones tell us our location at any given moment, has set unreal expectations. "This is not the first time we have had to wait a few days to find the wreckage."

Based on what he's heard, Cox believes it's increasingly clear that the plane somehow veered from its normal flight path. He said that after the plane disappeared from radar, it must have been "intact and flew for some period of time. Beyond that, it's all speculation." If it had exploded mid-air along its normal flight path, "we would have found it by now."

Malaysian civil aviation chief Azharuddin Abdul Rahman, whose agency is leading a multinational effort to find the Boeing 777, said more than 1,000 people and at least 34 planes and 40 ships were searching a radius of 100 nautical miles (115 miles; 185 kilometers) around the last known location of Flight MH370. No signal has been detected since early Saturday morning, when the plane was at its cruising altitude and showed no sign of trouble.

Some aviation experts are already calling for airlines to update their cockpit technology to provide a constant stream of data — via satellites — back to the ground. Information about key system operations is already recorded on the flight data and voice recorders — the so-called black boxes — but as this crash shows is not immediately available. Such satellite uplinks would be costly and the benefit is debated.

Just about every major jet to disappear in the modern era has eventually been found. The rare exceptions didn't involve passengers.

In September 1990, a Boeing 727 owned by Faucett Airlines of Peru was ditched into the North Atlantic after running out of fuel on its way to Miami. The accident was attributed to poor pilot planning and the wreck was never recovered.

More mysterious was the disappearance of another 727 in Africa. It was being used to transport diesel fuel to diamond mines. The owners had numerous financial problems and one day, just before sunset, the plane took off without clearance and with its transponder turned off. It is believed to have crashed in the Atlantic Ocean. One theory, never proven, is that it was stolen so the owner could collect insurance.

"I can't think of a water crash in the jet age that hasn't been solved ," said Scott Hamilton, managing director of aviation consultancy Leeham Co.

The Malaysia Airlines jet had been headed from Kuala Lumpur to Beijing. The 239 people aboard were mostly from China. In Beijing, passengers' relatives have complained that the airline has not been forthcoming with information, and that they've had to rely on news reports.

Some of those reports, however, have led to dead ends. Those false alarms appeared to leave searchers with little to go on.

The flight "was very high up in the air early in the morning, when it was still dark," Azharuddin said. "We have no witnesses on the ground and nobody on the plane can be contacted. The area is over the sea, so it's not as easy as that. There are a lot of constraints."

Whether the plane broke up in mid-air or crashed into the water, there would be some debris.

If the plane broke up "for some aerodynamic reason, like the wing fell off or there was a depressurization, there'd be big chunks of wing and fuselage all over the place. So it'd be very unlikely that it would just be destroyed and turned to dust," said Smart, the aerospace engineering professor.

He added that much of the wreckage may be at the bottom of the sea, which is 50 to 60 meters (165 to 195 feet) deep in the area where the plane was last detected.

The size of the debris field will be one of the first indicators of what happened, aviation experts say. A large, widespread field would signal the plane likely broke apart at a high elevation, perhaps because of a bomb or a massive airframe failure. A smaller field would indicate the plane probably fell intact, breaking up upon impact with the water.

Discovering the debris can take days.

A week after an Adam Air flight carrying 102 people vanished over Indonesian waters on Jan. 1, 2007, an Indonesian navy ship detected metal on the ocean floor. But it would take another two weeks for the U.S. Navy to pick up signals from the flight data and cockpit recorders, and seven months for the boxes to be recovered. The fuselage remains on the ocean floor, and Adam Air is now defunct.

The Malaysian Airlines jet could be less of a challenge than the Adam Air crash in one respect: It was last tracked over much shallower water.

But for now, the mystery is overwhelming.

"It's hard to imagine what could have caused it with these modern planes," Smart said.

Gelineau reported from Sydney. Mayerowitz reported from New York. Chris Brummitt in Kuala Lumpur and Niniek Karmini in Jakarta contributed to this report.