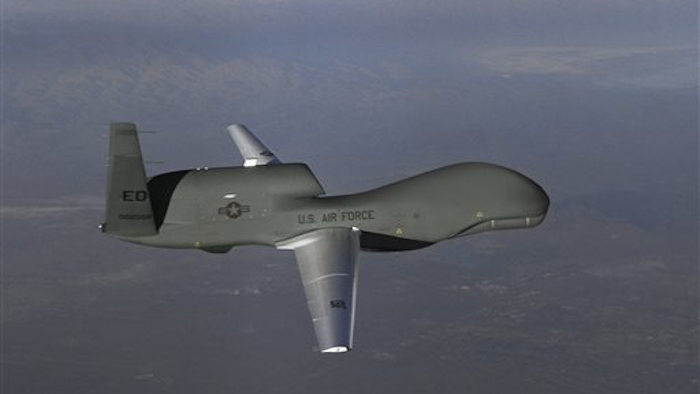 GRAND FORKS, N.D. (AP) -- Two student pilots are seated shoulder to shoulder before a bank of video monitors, maneuvering an unmanned aircraft by keyboard and mouse as the drone descends toward a virtual runway in a suburban landscape.

Aaron Gabrielson and Andrew Regenhard, aviation students at the University of North Dakota and self-proclaimed video-game junkies, could just as well be sitting on a couch playing Xbox. But instead of tapping their fingers on a controller, they're learning to fly the plane and use onboard equipment that includes a camera with a zoom lens.

"Some people argue that nothing is going to be like flying an actual airplane. Granted, looking down and seeing you're 5,000 feet above the ground is pretty exciting, but I've always been addicted to video games, and this is awesome," Regenhard said.

Mastering the Corsair simulator is the first practice course for the two trainees, who are among hundreds of student pilots nationwide preparing for jobs that don't exist yet. They and their classmates are eager to cash in on the booming market for drone operators that's expected to develop after more unmanned aircraft become legal to fly in U.S. airspace, which could happen in the next few years.

The university's unmanned aircraft degree program, the nation's first, exploded from five students in 2009 to 120 students last year. Embry-Riddle Aeronautical University and Kansas State have since added similar programs. Dozens of other schools offer some courses in what's known as UAS — unmanned aircraft systems — which range from drones as big as small planes to 2-foot-wide mini-helicopters.

"This pie is pretty big," said Al Palmer, director of UND's unmanned aircraft program. "Everyone can get their little slice of the pie, because we can't do all the training in North Dakota."

The skills needed to fly larger unmanned planes are not unlike those required to fly modern aircraft with computer-based flight controls, professors say. The toughest part of unmanned flying comes with doing it from the ground: You can't feel what's going on.

"You don't have feedback," Regenhard said. "When you push the yoke forward in the aircraft, you feel yourself and everything going down. With this, you just see it."

Drones are best known for their use by the U.S. military, but other markets beckon. Amazon made a splash earlier this month by unveiling an embryonic effort that might someday deliver packages by drone, though the company acknowledged practical use is years away.

Most of the potential civilian drone market is in precision agriculture. Unmanned aircraft are already used for seeding and spraying in Japan. Drones may be used someday to detect disease in crops, depending on the development of sensors.

The potential applications for other unmanned aircraft are endless, said Michael Toscano, president and CEO of the Association for Unmanned Vehicle Systems International.

The Boeing ScanEagle, which can fly for 20 hours on a couple of gallons of fuel, was originally developed to help commercial fishermen find and track schools of tuna. The Navy has used the plane to watch pirates. In recent years, North Dakota law enforcement and the university have used the drone to monitor rivers during flood threats in the Red River Valley.

For students, it all adds up to strong job prospects after graduation.

"Whether it's designing a vehicle to go into forest fires or catch poachers in the Galapagos, they're getting opportunities to be part of the next generation of aerospace like no one else is," said Melanie Hanns, Embry-Riddle spokeswoman.

Many students who grew up wanting to be commercial airline pilots are changing their major to unmanned systems. Among them are self-proclaimed computer geeks who don't mind staying in one place.

"Airplanes are cool and fun and all that stuff," said Logan Lass, a student at North Dakota. "But it's my particular personality that I don't really want to fly big jets. Growing up around computers and having a love for aviation, I figured the best option was to combine the two of them."

Over the last decade, it's gotten much tougher to get a job as an airline pilot. Many pilots started out at smaller regional airlines, but pay there is poor, and airlines are shifting away from smaller planes. Meanwhile, growth has been minimal at major U.S. airlines, cutting the number of new jobs for pilots, and bankruptcies have reduced pay.

Compare that to the outlook for drones. The Federal Aviation Administration projects some 7,500 commercial drones could be aloft within five years of getting widespread access to American airspace.

An industry commissioned study last spring predicted more than 70,000 jobs would develop in the first three years after Congress loosens restrictions on U.S. skies. The same study projects an average salary range for a drone pilot between $85,000 and $115,000.

Palmer, the UND instructor, said one of the first graduates in the school's UAS program took a job with a California aeronautics company for $50 an hour.

"That's probably not bad for a kid out of college," Palmer said.

The hopes for civilian drones might not be realized as quickly as many people in the business had hoped. Concerns about security, privacy and whether drones will be able to detect and avoid other aircraft could push the grand opening beyond a 2015 deadline set by Congress.

In the meantime, North Dakota's unmanned aircraft students are looking to master the Corsair simulator. Then they advance in January to train for the larger MQ-1 Predator and MQ-9 Reaper drones.

"That is what a lot of employers are looking for," aviation student Spencer Wheeler said. "That's why I came to school here. This is the Harvard of aviation."

The deal gave a lift to the order book for the Max, which was grounded for nearly two years.
Nov 17th, 2021

He traveled to the edge of space with William Shatner on a Blue Origin spacecraft last month.
Nov 15th, 2021

He was accused of trying to steal technology related to GE Aviation’s composite aircraft engine fan.
Nov 8th, 2021
Follow Us
Most Recent