The Lockheed Martin-built Orion spacecraft gently splashed down into the waters of the Pacific Ocean at 11:29 a.m. EST this afternoon, completing the first test flight of NASA's deep space exploration capsule. After a successful launch from Cape... 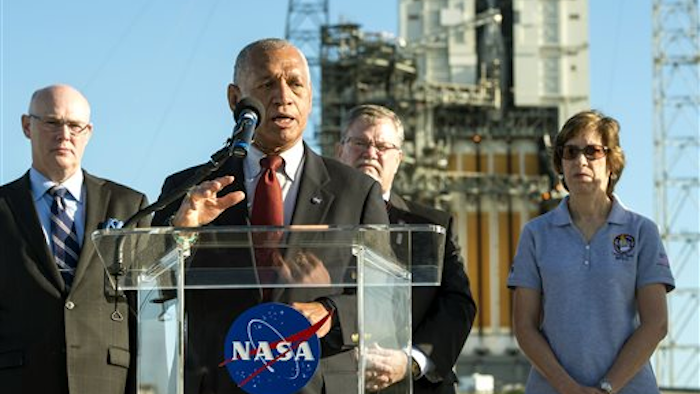 The Lockheed Martin-built Orion spacecraft gently splashed down into the waters of the Pacific Ocean at 11:29 a.m. EST this afternoon, completing the first test flight of NASA's deep space exploration capsule.

After a successful launch from Cape Canaveral, Florida aboard a United Launch Alliance Delta IV Heavy rocket at 7:05 a.m. EST this morning, Orion orbited the Earth twice, reaching speeds of 20,000 miles per hour and traveling through belts of intense radiation before enduring a fiery, 4,000 degree F re-entry into Earth's atmosphere.

"There were a few moments when I held my breath, but today's flight couldn't have gone better," said Mike Hawes, Lockheed Martin vice president and Orion program manager. "Orion is going to push the boundaries of scientific discovery, and for the men and women of Lockheed Martin who have worked tirelessly for the last six years to make this test possible, it's an honor to be a part of this moment in history."

-- Separation Events: A launch abort system, a service module, protective panels, and a forward bay cover successfully jettisoned from the spacecraft at predetermined times during the flight.

-- Guidance and Navigation: Deep space missions require advanced avionics that guide the spacecraft using an array of sensors and thrusters. EFT-1 demonstrated Orion's ability to guide itself autonomously through launch, orbit and re-entry.

-- Radiation Protection: Twice during today's flight, Orion traveled through the Van Allen belt, a layer of intense radiation located above Earth's atmosphere. That will help engineers measure the effect of deep space radiation on both astronauts and on-board electronics.

-- Parachutes and Recovery Operations: Orion's 11 parachutes deployed in stages, slowing the spacecraft from a 20,000 mph re-entry to 20 miles per hour at splashdown, at which point the U.S. Navy and NASA Ground Systems led an at-sea recovery from the USS Anchorage.

"Throughout the flight we recorded data from the spacecraft, and later this month, when it arrives back to Kennedy Space Center, we'll pull select components off the spacecraft to include in our overall analysis," added Hawes. "The insights we'll gain from today's flight are invaluable for Orion's future. Meanwhile the team will continue their work preparing for Exploration Mission-1, when Orion will be integrated and tested with the Space Launch System rocket for the first time."

Headquartered in Bethesda, Maryland, Lockheed Martin is a global security and aerospace company that employs approximately 113,000 people worldwide and is principally engaged in the research, design, development, manufacture, integration and sustainment of advanced technology systems, products and services. The Corporation's net sales for 2013 were $45.4 billion.