A Japanese space explorer took off Wednesday on a six-year journey to blow a crater in a remote asteroid and bring back rock samples in hopes of gathering clues to the origin of earth. The explorer, named Hayabusa2, is expected to reach the asteroid in mid-2018, spend about 18 months studying it... 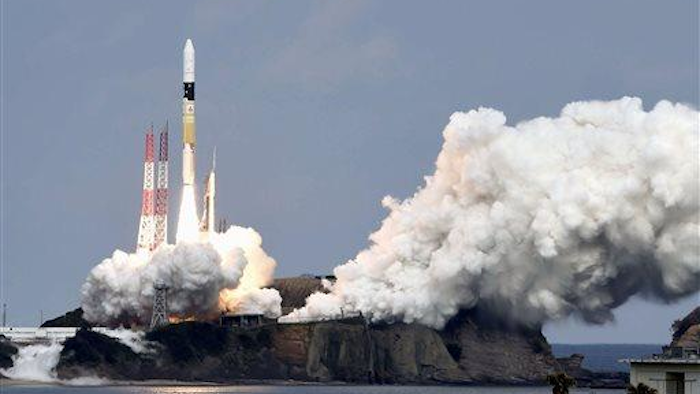 A Japanese space explorer took off Wednesday on a six-year journey to blow a crater in a remote asteroid and bring back rock samples in hopes of gathering clues to the origin of earth.

The explorer, named Hayabusa2, is expected to reach the asteroid in mid-2018, spend about 18 months studying it and return in late 2020.

A small device will separate from the explorer and shoot a projectile to blast open a crater a few meters (several feet) in diameter. The explorer, which will hide behind the asteroid during the blast, will then try to collect material from inside the crater.

Asteroids can provide evidence not available on earth about the birth of the solar system and its evolution. JAXA, Japan's space agency, said the research could help explain the origin of seawater and how the planet earth was formed.

Hayabusa2 will attempt to expand on the work of Hayabusa, a previous explorer that returned in 2010 after collecting material from the surface of another asteroid. By reaching inside an asteroid this time, the new explorer may recover material that is not as weathered by the space environment and heat.

The earlier mission was plagued by mechanical failures and other problems. JAXA hopes improvements since then will make this trip smoother.

"The mission was completed one way or another, but we stumbled along the way," said Akitaka Kishi from JAXA's lunar and planetary exploration program. "To travel there and bring back something is extremely difficult."

Hayabusa2, which was launched from Tanegashima Space Center in southern Japan, is a rectangular unit with two sets of solar panels sticking out from its sides. The main unit measures 1 x 1.6 x 1.4 meters (3.3 x 5.2 x 4.6 feet) and weighs about 600 kilograms (1,300 pounds).