The first 3D printer in space has popped out its first creation. The 3D printer delivered to the International Space Station two months ago made a sample replacement part for itself this week. It churned out a new faceplate for the print head casing. Space station commander Butch Wilmore... 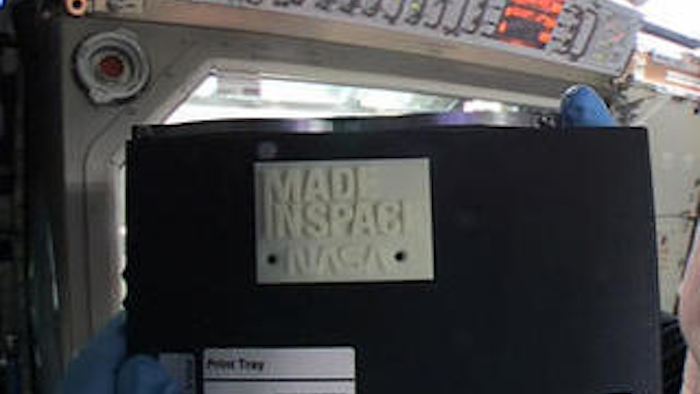 The first 3D printer in space has popped out its first creation.

The 3D printer delivered to the International Space Station two months ago made a sample replacement part for itself this week. It churned out a new faceplate for the print head casing.

Space station commander Butch Wilmore removed the small plastic creation from the printer Tuesday, a day after its manufacture.

Some of the plastic piece stuck to the print tray, said NASA spokesman Dan Huot. He noted it's part of the learning process and will be further investigated.

About 20 objects will be printed in the next few weeks, all for return to Earth for analysis, NASA said. The space agency hopes to one day use 3D printing to make parts for broken equipment in space — "an on-demand machine shop," according to project manager Niki Werkheiser.

Made in Space, the Northern California company that supplied the space station's 3D printer, called it "a transformative moment." The newly created, rectangular faceplate — considered functional by the company — includes the Made in Space name, as well as NASA's.

"When the first human fashioned a tool from a rock, it couldn't have been conceived that one day we'd be replicating the same fundamental idea in space," Aaron Kemmer, chief executive officer, said in a statement.

Similar 3D items will be duplicated at the company's offices in Mountain View for comparison.

The stronger-than-expected adhesion to the print tray could mean that the layer-by-layer bonding process is different in weightlessness, NASA noted.

The company will replace the orbiting demo machine with a much bigger commercial printer next year. The European Space Agency, meanwhile, plans to fly its own 3D printer in 2015.