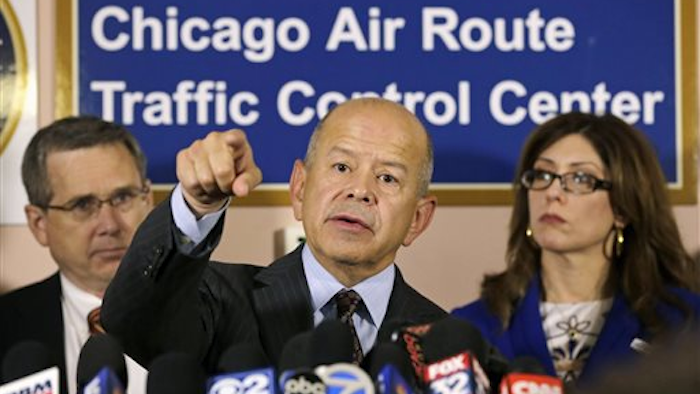 FAA Administrator Michael Huerta said work has begun to reduce the system's disaster response time from days to hours. But he said broader security and technology changes depend on federal lawmakers providing the funds.

"We hope to never see an event like this again," Huerta said in a conference call with reporters. "But we must be prepared."

It took more than two weeks to fully repair the Aurora, Illinois, regional control center after a 36-year-old contract worker set fire to communications equipment before trying to commit suicide. The fire caused more than 2,000 canceled flights and brought Chicago's two international airports to a standstill.

That "inconvenienced passengers, reportedly cost the airlines over $350 million and raised questions about the resiliency of our national airspace system and its ability to withstand a similar systematic attack in the future," according to a five-page FAA report.

The company that employed the contract worker, the Harris Corp., is paying for the damage to the facility, but the FAA had to pick up the tab for moving controllers to other facilities during the outage. Huerta said that part of the recovery effort cost the FAA "in the millions," but that he didn't have a final number.

The FAA is immediately revamping its backup systems that would allow for a smoother transfer of control of high-altitude air traffic to alternate facilities in the event of another outage at a major facility, the report said.

The report also called for speeding up the transition from a 1950s-era radar-based system to one based on GPS. Known as NextGen, the FAA's more modern satellite-based program should improve the response to disaster, Huerta said.