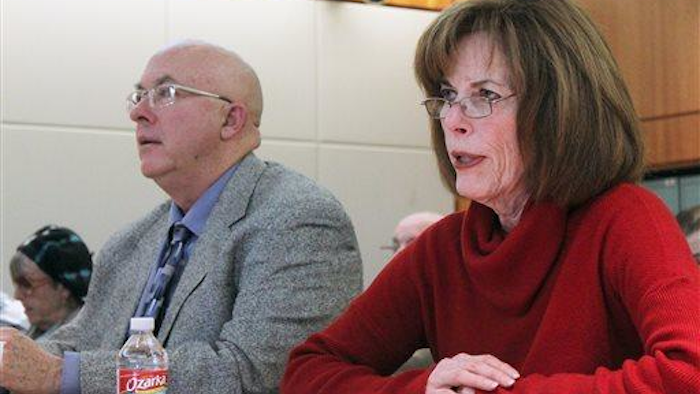 Members of a legislative finance oversight committee grilled spaceport Executive Director Christine Anderson after she handed them a presentation filled mostly with photographs.

Rep. Patricia Lundstrom, of Gallup, the committee's vice-chairwoman, questioned the business plan and said the point of the meeting was to go over hard numbers and cover how the state should move forward.

"I'm disappointed. We need to have more than six pictures," Lundstrom said as she thumbed through Anderson's presentation.

"We want to see something. What's different? What makes us more competitive? This business plan we've seen the last six years in a row does not," she said.

There have been concerns about the spaceport's future after Virgin Galactic's spacecraft broke up over the California desert during an Oct. 31 test flight. One pilot was killed and another was seriously injured.

While it could be at least six months before Virgin Galactic resumes tests flights, it's unclear how soon commercial flights could begin. And the longer it takes the space tourism company to launch operations in New Mexico, the more pressure builds on the spaceport authority to generate revenue needed to keep the facility open.

Anderson told lawmakers that the point of the spaceport is not to make a profit, but to attract enough business and tourism to keep the facility afloat and to create jobs in southern New Mexico.

The key moving forward will be to diversify the spaceport's revenue, she said.

That means encouraging Elon Musk's company, SpaceX, as it works to develop reusable rockets that can be launched from the spaceport, as well as using the futuristic backdrop as a concert venue, and for fashion and vehicle photo shoots.

The spaceport, built specifically to launch paying customers and payloads into the outer edges of the stratosphere and beyond, was featured prominently just days ago by Kawasaki in an ad for its newest motorcycle. Earlier this fall, Land Rover teamed up with Virgin Galactic for another commercial.

Spaceport board chairman Richard Holdridge said the spaceport authority is in discussions with several prospective tenants but he could not disclose them for competitive reasons. He said the goal is to sign at least one new tenant in the next fiscal year.

Lawmakers also voiced concerns about a dirt road that is used to access the spaceport from Las Cruces. It will be harder to attract customers without a developed road, they said.

Spaceport officials do not plan on asking lawmakers for money for the road, but Anderson said she will be seeking $4.5 million for a new hangar and funding to help address a $1.7 million budget deficit resulting from lost user fees due to the Virgin Galactic delays.